The day started out like a lot of days around here lately overcast, cold and rainy.  The forecast called for more of the same.  So I piled on my rain gear and headed out the door.  I picked up my sis and off we went wondering if we were sane.  I had decided though since this was a run for veterans I could handle a little rain as they go through much worse than that to preserve all the freedoms that we enjoy.  THANKYOU to all the men and women of this country who have served to protect us!  I LOVE YOU ALL!

We got to the registration and number pickup area and I would swear the rain started falling harder from the sky, luckily they had a small covered area to pick up number, but they were not well organized.  I love the shirts we got though.  After we registered we had to find the parking area by the starting line, again not real organized and was a little confused as to where we had to go.  The website said the race started at 9:30 and the sign at the race said 10:15 and the organizers there said 10:00?!  We found the parking lot after a little driving around and sat in the car for 40 minutes watching the rain come down in torrents. 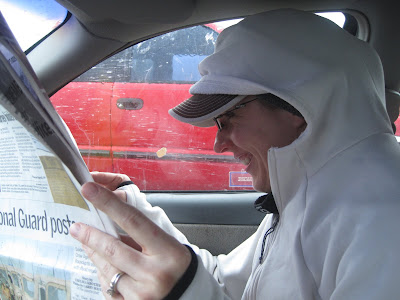 We got a paper to read to pass the time! 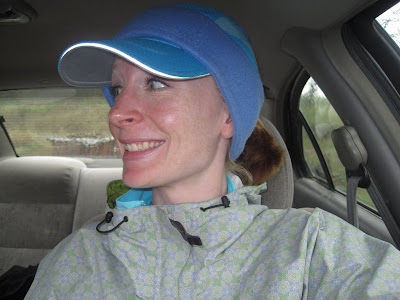 Finally ten minutes before start time we got out and ventured up to the start line, so not really a trail run as it was on a paved bike path, I didn't wear my racing flats since I thought it was a trail run. This threw me a little mentally, especially when I saw others in their flats.  The gun finally went off and the rain also let up a little, which was a bummer since I was in full rain gear.  I route was full of hills and by the 1 mile mark I was pooped! I finally felt back on track around two miles and managed to win first female by nearly 2 minutes.  My time was 23.13 which is slow for me, but considering the hill and full rain suit, and shoes, I was happy.  I knew I wouldn't PR at this one.

The shirt was really cool and one of our state senators was on hand to hand out awards as was the city mayor and county commissioner. So I had to have a photo op.  They all thought that was pretty fun, but hey I have a blog I need pictures for! 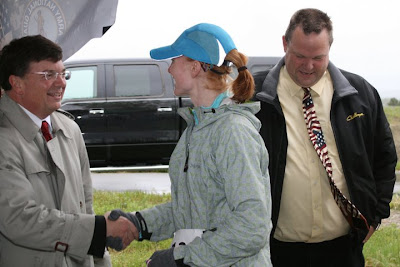 I had no idea my hair band was falling out of my hair until I saw this picture. 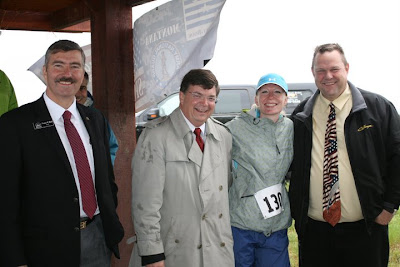 My kids thought the medal was really cool, but my dog was not so impressed and tried to chew the ribbon up. 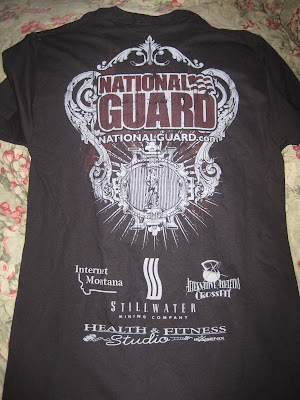 The back above and the front and medal below. Notice where the dog chewed on it. Maybe he was mad I ran without him! 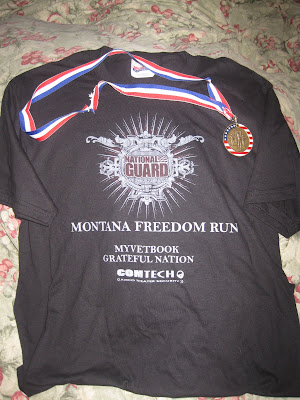 Posted by Christy @ My Dirt Road Anthem: A Runner's Blog at 8:16 PM