I picked up my race packet on Wednesday for the 5 mile Womens Run on Saturday.  The shirts are just regular long sleeve cotton shirts.  I keep hoping they will switch to tech shirts, but it wasn't this year.  They always have a pretty design for their shirts.  This year the shirts were a dark purple. 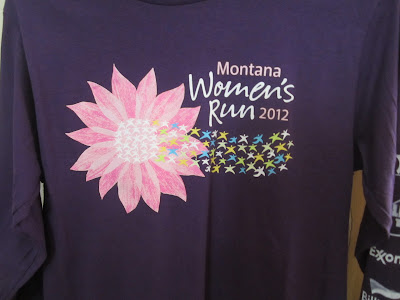 There was a disapointing lack of swag in the bag.  Last year we at least got chapstick and some great coupons, a pen or two, some mints, and this year.. a fold up comb and mirror.  Race directions and our number. 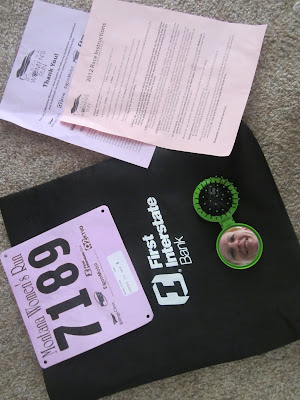 The members of Team Beef Montana that were running the 5 mile met up before the race for a group picture.   All but one of the girls in the red tanks are on my Hood to Coast team. 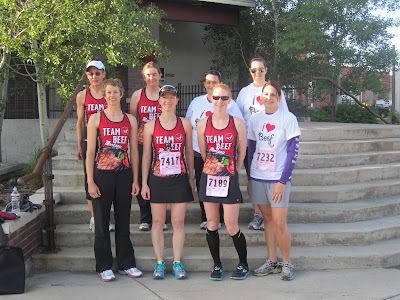 This is a pretty big race for Montana. They tell the faster runners to go up front at the start, but you still see a lot of women at the front of the crowd who are not going to be running very fast.  Kind of annoying, but I have learned to just get right to the front so I don't have to do so much weaving at the start of the race.

The gun went off right at 8 am and we were off.  The first mile felt really good.   I felt great, my legs felt great, my breathing was under control.  I worked on holding an even pace and not going too fast too early in the race.  First mile split was 6:42.

Right after the first mile we turned and suddenly were running into the wind.  This kind of threw me a little and I was having trouble staying focused mentally.  I did pass a couple of girls in the second mile, but ran it a lot slower in 7:02

Miles three and four went by pretty fast and I was feeling pretty good and at the same time still having problems staying focused mentally.  I would start with a mantra and pretty soon would realize I was thinking about the wind or my hip or anything but focusing on the race and my pace would be slowing down.  Splits were 6:54 and 7:08

Mile 5 was with the wind again and I was catching a girl I knew in front of me, we spent most of the last mile leap frogging each other, I kept thinking wow we are really pushing each other and we were but still weren't going much faster than a 7 min/mile pace.  We were both pretty tired.  She ended up crossing the finish line in front of me, but we both finished under 35 minutes.
My goal was to beat last years time of 35:01 and my Garmin time was 34:58 for 5.06 miles for a 6:55 pace so I am happy with that.

Not everyone stuck around for awards. 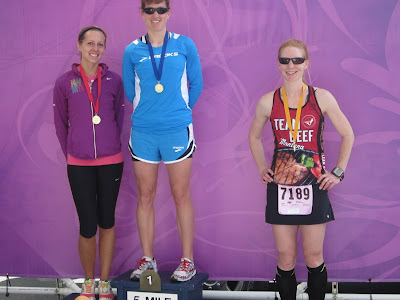 And I got my new computer set up today so hopefully I will be back to blogging and catching up with everyone soon!

Posted by Christy @ My Dirt Road Anthem: A Runner's Blog at 8:53 PM