1.  I have to admit I have been a little jumpy since a mountain lion was spotted so close to my house, but at the same time I don't want to live my life in fear and be stuck inside.  I ran later in the morning today and carried my pepper spray.  I also ran along the wheat fields that have been combined recently so that if there was a big cat he wouldn't be able to sneak up on me.  No good hiding spots...just acres and miles of empty wheat fields the perfect color to camoflage a mountain lion.... 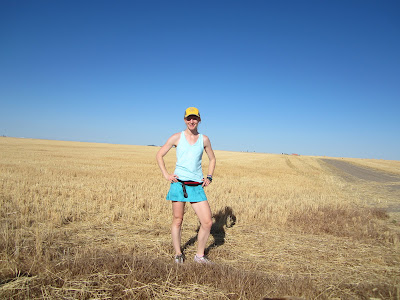 No I didn't see any.  I also left my ipod at home and watched my dog very carefully, hoping he would be able to see one before I did.

2. 8 miles.  That is how far I ran yesterday with no foot pain.  Longest run since the marathon earlier this month..YAY!  Felt so good.  I originally planned 6, but it felt good so I kept running.  Once I got to 8 I considered 10, but then decided the smartest thing to do would be to call it a day.  So I went home biked 2 miles and rode the elliptical for another 6.5.

Marathons really take a lot longer to recover from than half marathons.

3.  I recently canceled our Dish Network subscription and for the most part have not missed it. I got tired of paying 70 dollars a month for hundreds of channels I don't watch.  I miss the DVR part, but for the most part am so happy with my decision.

I went ahead earlier this month and signed up for NetFlix.  What a great thing.  I started watching Grey's Anatomy from the beginning.  Some episodes I had never seen, or forgotten.  I am almost done with the second season already.  It is like an addiction.  I put it on the iPad while I am cooking supper, while cleaning the house and while I am cross training on the elliptical.  I can think of several other shows I want to watch once I am done with Greys.

Posted by Christy @ My Dirt Road Anthem: A Runner's Blog at 4:00 AM