It was a bit of a bummer to have such perfect weather all week and then have a cold and windy day for the 5k.  Acutally I don't think it would have been too bad if the wind wasn't so cold and I think there were up to 20 mile an hour winds.  With temps in the 30s already it made it feel pretty cold.  At least the sun was shining!
I didn't really have a specific goal in mind for the race, I was thinking, hoping to get right around 7 minute miles.  I was pretty confident I could pull that off and for the street mile I wanted to at least come close to last years time of 6:32.  (I know I can do a mile faster, but coming off of a 5k with tired legs, not so much)

﻿﻿﻿﻿
We were so cold waiting for it to start, we even ran a little trying to get warmed up.
I lined up near the front and felt like I was being passed by lots of people right away, but I glance at my garmin confirmed that I was still going faster than I wanted to at 5:55 pace, so I slowed down a little more.  I knew a lot of those people were starting out too fast and I would start passing some of them soon.
I did.  It is so much funner to pass people than to get passed.  First mile was 6:52 and my legs were feeling tired, so I was little worried about how the rest of the race was going to go.
I settled in for the second mile, most of which seemed into the wind.  My toes were freezing.  I was still passing quite a few people, most all of which were males.  HAHAHA. I couldn't see any girls ahead of me though, so I knew the front runners were way out in front of me. Second mile 7:02.  Little worried for the last mile at this point.
No need to worry.  I seemed to really get my legs under me at this point and pulled off a 6:44.  with a 6:10 pace for the last .14.  I may have dry heaved several times after crossing the finish line.  (I am such a heaver)
Final garmin time for 3.14 miles was 21:33.   Fastest 5k of the year.  and all with no speedwork since June.  :)
My little sister had her fastest 5k time ever with a 23:30, with her last mile a 7:12.  I think she surprised herself.
We were 3rd and 9th in our age group.  I was a little disapointed that the age group was a 30-39, instead of a 30-34 since it would be my very last race while 34.  WHAT!  Yup I have a birthday Tuesday :)  Especially since the two girls who beat me were in the 35-39 age group. I could have won the age group and   (okay done whining)
So after that I was signed up to do the street mile.  I was waiting outside the beer garden for my sister to get her beer and watching the street for the people to get lined up.  Except somehow I missed my sister and they lined up somewhere different from last year.  By the time I found my sister and figured out I should find the start line somewhere else it had already started.
I briefly debated running down to the start line and running it, but I could see people coming in already.  I didn't want to have to weave through all the walkers so I went and filled up my free pint glass instead :) 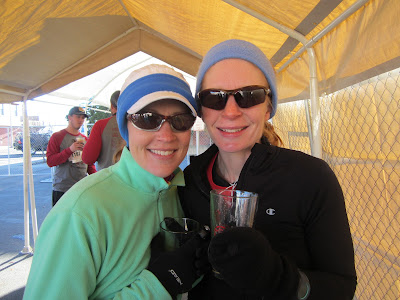 We waited for the awards and then ran to our vehicle and had the heat on high all the way home trying to get warmed up.

The shirt was a cotton long sleeve shirt and despite what it looks like in this picture is maroon and a dark grey.  A very comfy lounge around the house type shirt.  Not the kind I won't ever wear again. 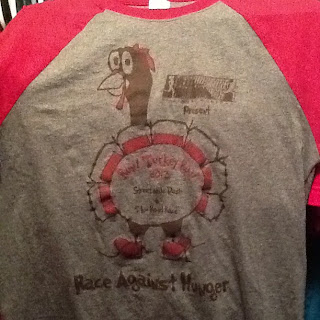 Hope you all had a great Thanksgiving!

Posted by Christy @ My Dirt Road Anthem: A Runner's Blog at 6:59 AM