kind of over cold weather and how Rocky ended life number 2.

It has been over 72 hours since I got done running Peaks to Prairie and I still have stiff sore legs. Running down a hill for over 9 miles is nothing to laugh at. Every time at work I would have to bend down to pick something up off the floor I would just cringe.

Monday I ran an "easy" four miles.  I was thinking after the first quarter of a mile that I might just turn around and go home, but I warme up after a bit and it felt good to shake it out a little. It took me nearly 40 mintues to do the 4 miles.  I did laugh about that, what a difference from Sunday when it took me less than 28 minutes to do the first four miles of the race.

Monday I was also insatiably HUNGRY.  I didn't feel like I could eat enough food.  Especially salty food.  I craved potato chips, sadly I didn't have any in the house to eat.  I did eat an entire jar of pickles, several of them I ate wrapped in cheese.

It is cold out again this morning.  Kind of over that.  I want to be at least a little warm, not hot.  It just seems like we haven't had very many super awesome spring days and it is May 1.  I woke up to it being 26 degrees outside this morning.

I have put on a few pounds this winter... not sure really what to think about it.  I was worried the extra weight would slow down my running, but it hasn't appeared to have that effect.  My 5k a couple of weeks ago was 10 seconds away from a PR and my race Sunday was faster than I did it last year when I was 7 pounds ligher.

Not sure what approach to take with the weight gain.  I had lost several pounds in January when I did a month of Paleo eating.  all the weight I have gained has been since then so if I cound the weight I regained from January I have gained more like 10 pounds.  WTF.  I don't eat any different.  At least I don't think I do.  Is this some weird rebound effect from trying Paleo?

I do think some of it is muscle since I have been SO GOOD about doing strength training since January, but I don't think it all is.  I hate to whine about weight, but this is my blog.

Remember this little guy that I rescued last August and bottle fed, got up nights to bottle feed and help poop and pee? 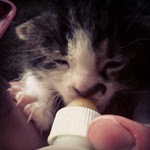 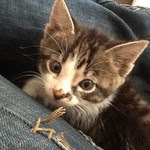 who helped nurse Cola after he got hit by a truck last fall and broke his pelvis? 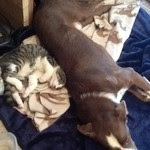 He somehow got ran over by my husband, who felt awful, and it ripped all the fur off his abdomen, broke some ribs, and I think his hip/pelvis/leg on one side were pretty messed up.  I thought he was going to die.

But nearly three weeks later he is doing good.  He walks with a bit of a limp, but other than that there don't seem to be any lasting effect.  I guess that means he is on his third life now since his mom left him for dead and he got ran over by a truck.

Posted by Christy @ My Dirt Road Anthem: A Runner's Blog at 9:23 AM