I stopped in at Target on Saturday to pick up a few things and on a whim looked at their running clothes.  Okay it wasn't really on a whim, I knew if I stopped at Target I would look at the running clothes, they usually are sold out of my size of anything I really like anyway so I figure it is pretty safe.

I ended up with two new pairs of C9 Champion shorts and I love them both although the pair I got on clearance for 50% off are my new favorite shorts.
I did a long run in them on Sunday and fell in love with them. so comfy, they never rode up and uber light weight.  Now I think I need them in black. Sadly the black was not on sale. 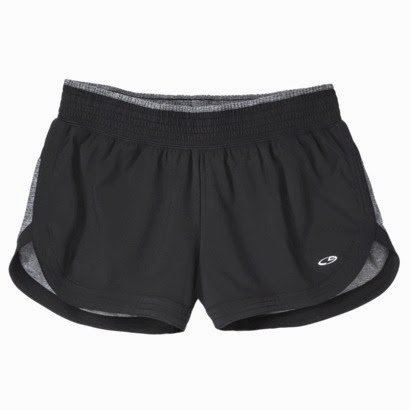 but it would match so many more things!  A lot of the reviewers on line compared them to Lulu shorts and were loving these shorts.  I don't own any Lulu shorts, but I love my Lulu skirts.

My son had a football camp Monday and Tuesday this week.  Somehow he and another kid about his size got grouped in with a lot older looking group.  He was really frustrated the first day as no one would throw him the ball and his team was awful.  I told him to hang in there and surely they would see he is pretty handy at catching a ball.   I love it when I am right.  He had so much fun Tuesday and got to handle the ball a lot and his team did a lot better.  A great a short lesson in perseverance. If that can be counted over two days.

While he was doing that my daughter and I went off for some shopping where I learned a lesson in perseverance also when she decided she had to have a light up with every step pair of flip flops at Walmart.  Since she has about 8 pairs of flip flops I refused to buy them for her.  She proceeded to whine about it the entire way through Walmart.  I didn't buy them and eventually she got over it.

My kids were reading a small milk bottle we got at Subway and they noticed it said fat free on it.  They both expressed relief that their milk wouldn't make them fat. (They drink whole milk at home btw) I know it is a hard concept for kids, but I had to have the fat doesn't make you fat talk with them (again.).  I try to keep it simple, but I am pretty sure they just roll their eyes at me anyway and secretly rejoice they aren't getting fat off their fat free milk.  They must get these ideas from school where they only serve them skim or 1% milk despite all the studies that show whole milk doesn't make for overweight kids.  Frustrating.

I am trying to find flowers our goats don't eat.  Not an easy task.  So far they haven't bothered the iris plants and some sage plants I have in the flower garden.  I have put fences around all my little lilac bushes and apple trees. Now I need to figure out how to cook goat meat fence off my flower gardens.  Did you know 65% of the red meat consumed worldwide is goat meat?

Posted by Christy @ My Dirt Road Anthem: A Runner's Blog at 5:54 AM