In January of 2010 I cashed in my change bucket and "won" a Garmin Forerunner 305 on Ebay. I am always so excited when I win something on Ebay. I know I don't  really win" because I have to pay for it, but I bid on it against others and got it.  To me that is like winning! How fun right!

Of course it was bitterly cold and windy when it finally arrived in the mail three days later.  I was so excited to use it, how did I not know about these before?  I had been running with a stopwatch, HA! Who really does that these days? Well, I was so there probably are others who haven't been educated too.  The heartrate monitor chest strap was slightly large so I had to tuck it into my sports bra so I didn't end up running with it flopping around my hips. I never really got used to it and quit using it after about 10 runs, but the watch transformed my running forever.

No longer did I have to measure out runs with my car and hope it was right. No longer did I have to guess how fast, or slow, I was going because now I know! Occasionally I run without it now just for the joy of running, but it bugs me too because then the run isn't properly logged in my Training Center.  Once I even raced without it, but only because I got to the race and the batteries were dead.  Oops.  Although I did have a personal best at that race, I still will wear it to every race I can because I like to know how fast I am going and how far I have to go!  In retrospect I could have gone with the Forerunner 205 as it is all the 305 is but has no heart rate monitor.  Plus it is blue and I like blue better than red.  Someday I would like to upgrade to the 405.  I drool over the pretty green one every time I see it, but it's pretty pricey and I live on a tight budget. 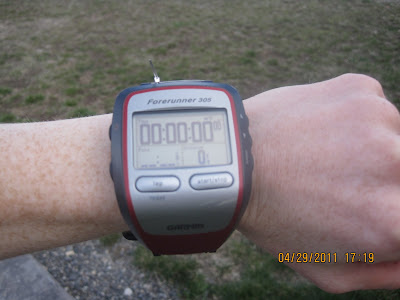 I know some people name their Garmin Forerunners, I never really did except I do refer to it as my Kickass Running Trainer  :) Maybe not real original but when you consider that before all I had was a stopwatch, my Forerunner 305 is really pretty kickass!  I love it. My only complaint so how bulky it is, I got the velcro strap to replace the band it came with and that helped quite a bit, but it still doesn't feel like a great fit.
Posted by Christy @ My Dirt Road Anthem: A Runner's Blog at 4:54 PM