I signed up for this one on Friday.  I hadn't much entertained doing it, but when I saw they had a family rate of $35 for the whole family and you got pint glasses, I was in! No t-shirts, which was fine with me. I have way too many race shirts as it is and hardly any of them get worn enough.  It is also the membership drive and renewal for our local running club.

The kids decided they wanted to do the 5k and not the kids 1 mile run.   I used to get all worked up and nervous before every race, but I noticed today with the race at 1, that at 11 I still had not decided what I was going to wear. I do have to admit with it being a Shamrock run I had it pretty narrowed down.

The kids were pretty nervous for the race, but told me I was not to hang back with them.

The first mile has a pretty significant hill before that ends at right about .3 miles into the run. and my legs that just ran a half marathon last weekend felt like they protested a bit and I was worried that maybe a 5k wasn't my brightest idea. The first mile was 7:24

Mile 2 is pretty flat for all of it and I was pleased to see my pace for this one was 7:07 and wondered if it would hold for the last mile. I was sticking pretty close to another gal and we were passing other runners pretty steady. I was hopeful for a bit that maybe I would pass her too, but she proved to have the stronger legs and by the end of the 2nd mile was starting to pull away from me pretty good.

Mile 3 thanks to running back down that hill we had to run up at the start was 6:59 (I was very thrilled to have it under 7!) 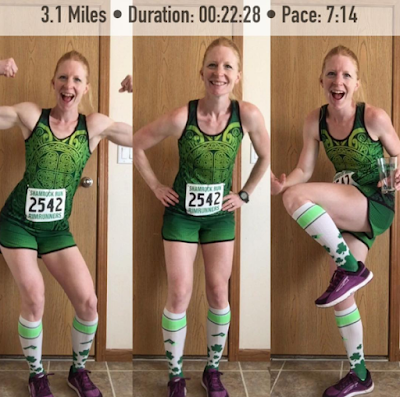 I then grabbed a water and headed back to see where the kids were at. I found my daughter and she was tired but looking strong with about a quarter mile to go here.

and my son wasn't far behind

Either way I'm happy and I was 4th female overall and won my age group.

My daughter finished just over 30 minutes and was 4th for 9 and under. She did so well, but did admit to being very happy to being done! My son wasn't too far behind and is a bit worried about how sore he will be.

My son was 5th in the 10-14 group,  They didn't really have kids age groups since they had a mile kids run. There was just a 1-19 age group, but the kids and I went back and counted what would be their age group roughly

We picked up our pint glasses and were going to wait around for the awards but it started to rain and it was cold and the kids were freezing after their run so we ran back to the car and the comforts of the heater, We were going to wait out the rain, but it didn't seem to want to quit so we left. I never picked up my age group award. Insert sad face.

This week's writing prompt: Local Races.  If you don't have anything to share about your favoriteLocal Races, feel free to post any running related blog post.  Link-up with Patty, Erika, and Marcia!
Posted by Christy @ My Dirt Road Anthem: A Runner's Blog at 3:55 AM