I had this race on my radar but didn't decide to sign up for it until the day before the race. My daughter decided she wanted to do the 5k as well. Since the 5k started at 8:45 and the half marathon started at 7, my mom agreed to bring her in.

I didn't think out any big goals for the race. My biggest goal in my head was to finish the half before the 5k started. I thought maybe I would run the 5k with Avery if my legs weren't too tired from the half.  (I am training for a 30k, so this is my long run for the week.)

The weather was looking perfect. Temps in the high forties at the start, partly cloudy and only a slight breeze.

Packet pickup was fairly simply except if you hadn't registered yet like we hadn't, it was painfully slow to get registered. We didn't get a t-shirt since we registered so late, we could have one left over from last year if we wanted.. we didn't. One of the last things I need is another cotton race shirt I won't wear.

They had lots of fun swag and you got to pick out two items. I picked out a buff and a water bottle. We all also got bubbles.   Other things to pick from included cell phone chargers, socks, hand sanitizer, wind shield scrapers and more.. all race themed of course.

I set out my race things about 8pm the Saturday night and went to bed.  I wasn't feeling stressed about the race at all.  I was a little worried about having tired legs after the 5 mile race I did last weekend, but my legs hadn't been sore at all after that and I had two great runs this week.

There were only about 70 people signed up for the half marathon, so a small one for sure, but there were lots of volunteers and the course was well marked.  I ran this one two years ago in the rain so I knew what to expect for the most part.  I had followed a plan for it that time so I wasn't sure I was going to beat my previous time of 1:43:12, but I was hoping to get close.
About 5 minutes before the start I went back and read my race recap from when I ran it two years ago, I think it helped my mental game during the race a lot, knowing when to expect the up and downhills. I also checked out the elevation profile to mentally prepare myself.

mile 1  7:57, 8:02, 7:46
I felt like I had a hard time getting my breathing under control for the first two miles. I have to admit it made me a little worried that it would be a rough race and was wondering if maybe I should slow up a bit.  My legs felt good though so I decided to keep pushing.   I noticed somewhere close to mile 3 that the back of my shorts on the left side felt a little cool.. like wet.  My water bottle on that side on my hydration belt was apparently leaking Tailwind on my shorts. It looked shut, but apparently was open enough for a slow leak. My shorts were soaked with Tailwind....I started to worry about chafing.

mile 4  7:37, 7:50, 7:35
My breathing settled in to an easier feel and my legs were still feeling good. This was all pretty much a slight down hill with one hill that was noticeable and looking at my pace you can guess which mile it was in.  As there was only 70 or so runners in the race at this point we were all pretty spread out. I could see two runners up ahead of me and was glad for it. I used them to focus on and keep pushing. I ate some Honey Stinger chews around mile 5.5 and told myself I could turn on my music at the halfway point. I decided I was feeling good though and didn't.  I wanted to save it for when I needed a kick.

mile 7  7:35, 7:27, 7:45
Miles 7 and 8 were still down hill and felt really good. I felt my Honey Stingers kick in around mile 7.  and loved the renewed energy it gave me. I turned on my music at mile 8 when the down hill part ended and we started a gradual climb.  My legs started feeling so tired around mile 9.5 and I wondered if I was going to hit a wall and be sorry so I ate the rest of my Honey Stingers and drank some Tailwind.

mile 10, 7:46, 7:57, 7:37
Mile 10 and 11 had a pretty good hill in it but also some down hill, I started catching a girl ahead of me and that was motivating for sure.  I was feeling tired, but not horribly so and at this point I know it isnt very much farther. Mile 12 I felt a kick of energy again and knowing I had only 2 miles to go was helpful. I started to feel like maybe my shorts were chafing my thighs, but it was just a vague irriation and I didn't dwell on it overly. I passed the girl in front of me going around a corner and heading up the last uphill portion.

mile 13 7:33, .1 pace 6:41
I was a little surprised at my pace here, but I knew the end was in sight and the girl I passed found a surge on energy too and went flying by me. She ended up finishing about 12 seconds ahead of me. The last mile the chafing really started to be uncomfortable, but I still wasn't that worried about it. Until I got across the finish line and checked out the damage. 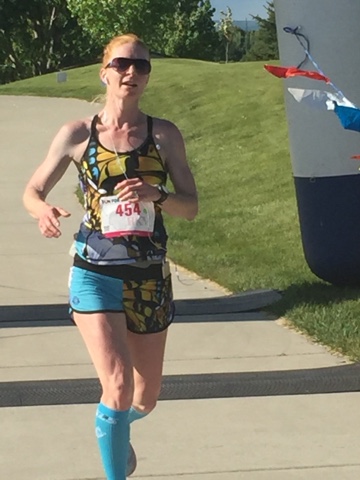 Tailwind being a little salty and a little sweet makes for some really good chafing. My thighs were chafed raw and bleeding a little. YEOW!  My mother had brought my daughter in for the 5k that started at 8:45 so they were there to greet me at the finish line. I loved it. 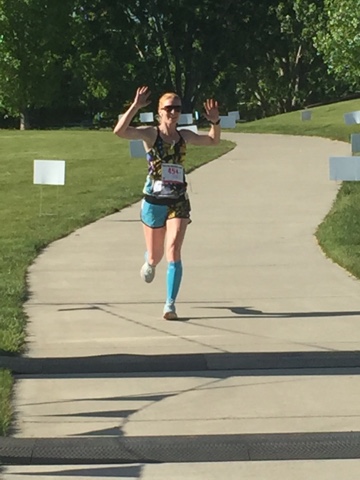 I got my daughter over to the start and helped her find her friend. I had originally planned to possibly run the 5k with her, but the chafing put that out of the question in a major way. She was a little sad and so was I not only to not get to run with her but I need the miles for my fast approaching 30k

Avery ended up with a PR in the 5k and 5th in the 12 and under age group. So proud of her! I think she is hooked on racing! 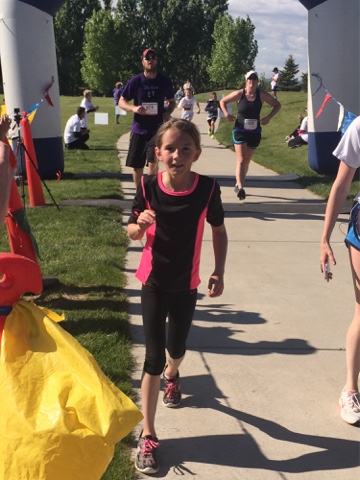 I beat my previous time on this course by 2 minutes exactly!! I know mentally that to finish before the 5k, I would have to keep my pace under 8 minute miles. 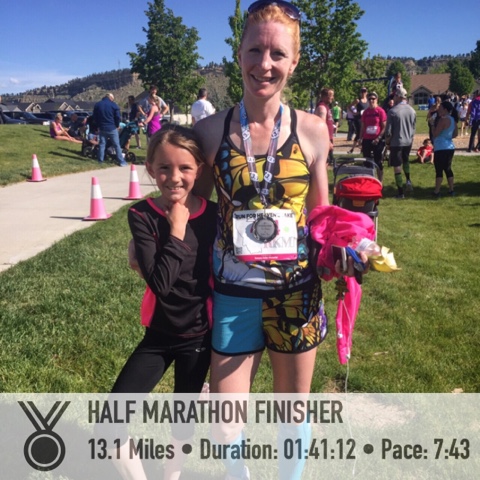 It was super fun having my mom at the finish line, just like in high school with cross country!

The swag.  We signed up too late for T-shirts but we still got the bubbles, and picked out a water bottle and buff. They had chapstick and little blue pocket things that can be clipped to your shoe to carry the chapstick or a key or money.  The medal were nice. 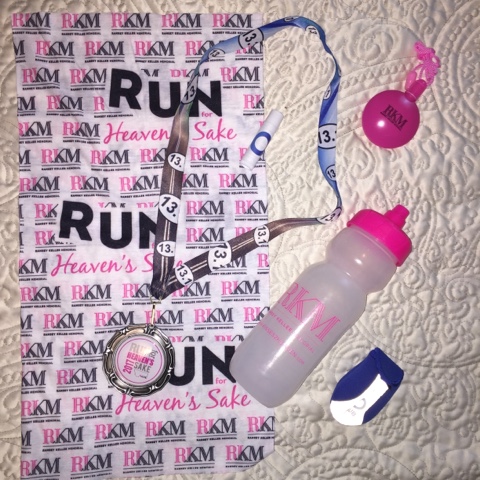 I would do this race again.

I ended up 6th female and 4th in my age group.  Once again, my age group around here is fast! I love it!
Linking up!

Posted by Christy @ My Dirt Road Anthem: A Runner's Blog at 4:50 AM