I signed up for this race the day before. I had it planned in my head all year to run it, but then kept forgetting to sign up. Most of Montana however the three or so (probably more) weeks before the run had a nice hazy film of smoke that at times made it impossible to run in so I decided to wait and see what the smoke did.  I didn't want to run a half in choking smoke. Then the week before the race I got a cold.  I was blaming it on the smoke. I ran 5 miles in it Sunday and it left my throat sore.

What followed was sore throat, stuffy nose, runny nose, frog in throat, congested feeling, cough, headache... bleh.  Friday I was feeling pretty good (ish) I could hardly talk and was blowing my nose every thirty minutes and it felt hard to breathe. I decided no half marathon.

Saturday morning I woke up and felt so much better! Minimal snot and coughing and I could breathe! So naturally I signed up for the half marathon.  I'm not sure my husband agreed it was a wise decision based on how my week went, but its hard to argue with a runner who has her heart set on a race.

Oh and there was a niggle in my left foot. Sort of been there since before the Ragnar Relay in Colorado.  That had me a little nervous, it really hurt during my last leg of the relay and ached some at work,

Anyhoo.. packet pickup was a breeze.. it was just a bib and a bag for the bib and pins and a few coupons.

I admit not having run in cooler weather since last spring I had a bit of a hard time deciding what to wear..shorts vs capris.. long sleeve vs short.  I ultimately decided tank, skirt, compression socks, arm sleeves and a buff, and maybe gloves as I hate cold fingers. and I wore my race favorite Altra The Ones. LOVE these shoes

Buses started taking people out to the start at 630.  Naturally, being excited about running a half I got on the second bus, only because the first was already full, and we got to the start at 6:50. The race didn't start until 8:15.  It was cold, but at least we mostly had the porta potties to ourselves for a bit as the two buses were the only buses and were headed back for more people.

I met a gal from Oklahoma and one from Wyoming and had a great time visiting and walking to keep warm. I saw some people I knew and really it was fun to catch up and meet new people and cycle through the porta potties three times,

Ten minutes out from race time I stripped off my warm outer layer and decided no gloves or sleeves, I didn't want to have to deal with them when I got hot.

I turned on my Garmin and since it didn't seem to be finding a signal, I got my phone out to turn on a tracking app there and no service.  Crap.

On the up side now I know I can at least start a race and run by feel and be pretty on! At least I think I was. The start of the race is downhill so I got passed by a lot of people who were feeling really good and went out too fast, but that's okay I like to have people to pass later.

I saw a 12 miles to go sign and was surprised at how fast it came up, my garmin was still busy searching for a signal and I didn't think my phone was tracking until sometime later it told me I had run a mile in 7:30, which bolstered my spirits to know I was running just about where I wanted to and that I would have some data to nerd out with later.

I was following a gal with a big ponytail as she seemed to have a pace similar to mine although she was about 20 yards up from me. She was great motivation.

Finally my garmin found a signal.. I was guessing about 2.5 miles into the race. I never saw another miles to go sign after 11 miles to go I think.. so I kind of felt like I had a vague idea, but still not really sure.

The miles seemed to click by fairly fast though, this is the 4th time I have done this race so I know what to expect. I was listening to a Marathon Training Academy podcast until about halfway through when I switched to my music.   I always do this 5-7 sometimes 8 miles in for a boost of motivation and once again it worked. 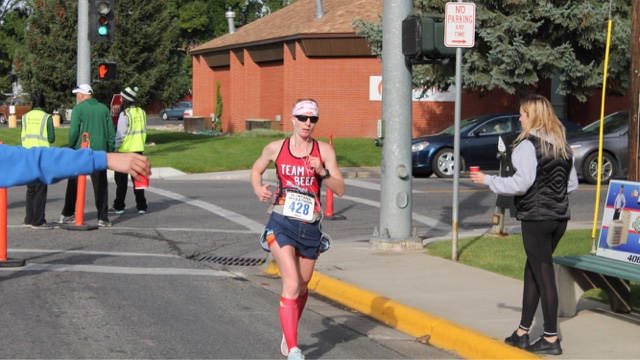 The music put an extra kick in my step again, that and the Espresso GU I took around mile.  Running past the 10k start is always super motivating, they hadn't started yet so there was people to cheer as you ran by and you are coming down a pretty nice hill when you reach them so between the downhill and the crowd boost my pace picked up quite a bit.

My legs were feeling good, my breathing was doing good, not over labored but working.   I was loving it all.

I passed a gal as I was running past a small group of people and one of the ladies not so discretely pointed at me and told that gal to pass me.  I was so annoyed she would do it while I could see and hear that there was no way I was going to be passed back and I was not! I used it as more motivation and gave a little kick of speed.

When I was guessing I still had about three miles left I was still feeling really good, but I could tell my legs were starting to feel tired and I was feeling it, but only 3 miles left... I GOT THIS!! 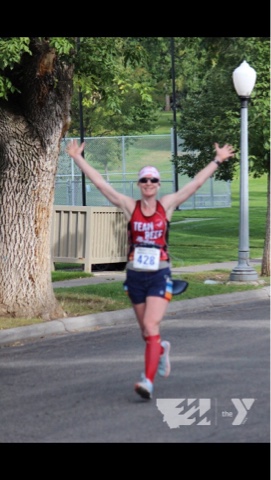 One mile left.. while feeling tired I also still felt really good and knew this was in the bag.. the big question looming in my head of course was... could I get it under 1:40?  I knew I was close.. looking back I don't know why I just didn't look at the time on my watch.  Math is not a high point while running races though. 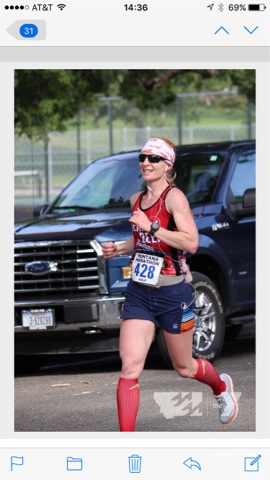 As I came down the final stretch I could see the clock but it read the marathon time which started 1 hour and 15 minutes before the half...once again...MATH while running! 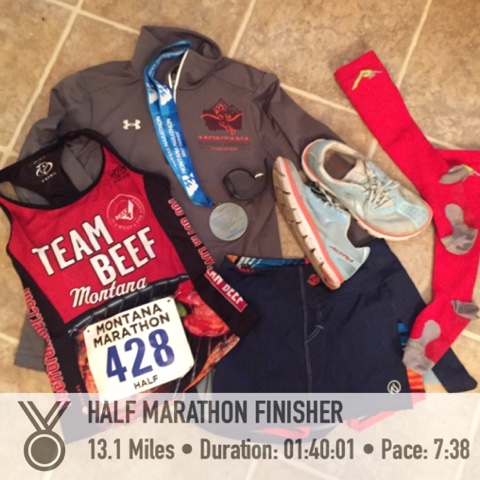 Once I caught my breath I went and got my medal and finishers shirt, some water and a cookie which I never ate and some pretzels that I did eat.  I ended up seventh female overall and 2nd in my age group.  Out of the 4 times I have ran this course this was my 2nd fastest time... I am happy with that, getting older not slower!

I do recommend this race, it has beautiful scenery, is well organized and while not gender specific shirts they are very nice and I do wear them 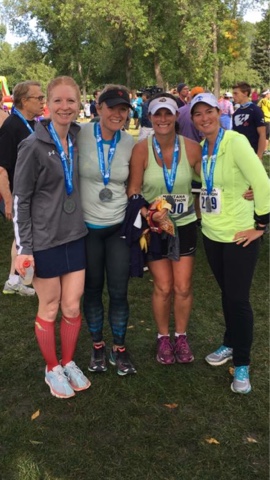