My mom and I left for Missoula Friday with my kids and met up with my sister along the way and took her daughter with us also.  We had a great time in Missoula and even rode on the carasol.

Packet pick-up was Saturday and seemed well organized.  There was a small race expo and I picked up a few gels, a running shirt that was on sale, and a new SPIbelt that is water resistant, with gel loops on it.

I set all my marathon clothes, gear, etc out before I went to bed and set three alarms in case one of them failed.
Marathon morning I got up around 3:30 when the first alarm went off, not that I really slept much.  I think I was awake most of the night.

The hotel I was staying had a shuttle to the buses that were taking us out to the start of the race, so I caught the 4:30 one and enjoyed chatting with the other runners.  Most seemed to be doing the half.

I sat with another girl who was doing her first marathon also and the time to the start seemed to fly by.

We got out to Frenchtown where the race was starting just as the walkers were starting at 5.  Fireworks were set off as they left.  There were LOTS of porta potties and I used one as soon as I got there and got back in line again at 5:30 to empty the tank.  This time there were longer lines, but they seemed to move pretty fast.

I got to the start line with about ten minutes to start and stood with the 3:40 pace group.  I decided this would be a good place to start.  My biggest goal was to finish the marathon in under four hours, but I also felt like I could do a 3:40 if things were going good. The temp was a lovely 50 degrees.

At 6 am the gun went off!  So exciting!  I had to work really hard to keep my pace above 8 minute miles.  My legs felt really good, but I knew I had a long way to go, so I kept slowing myself down.  The 3:40 pace group was way ahead of me for the first four miles but then they slowed down, and I stayed with them for a short time, but decided to push on.

I made sure to take time to enjoy the beautiful scenery and ran with out my ear buds in for the enitre first half.  I concentrated on my form, keeping the pace manageable, hydrating at every water station and trying to stay relaxed!

My body kept wanting to do more like a 7:50 pace, I considered letting it, but since this was my first marathon I thought it would be better to run more conservatively.  My problem is that I am a competitor and I want to do the best that I can.  I want to see how far I can push my body.

Here are the splits from the first half.  I was feeling great and was confident going into the second half.  I had eaten a Roctane at mile 5 and a peanut butter GU at mile 10.

Mile 14 had the only hill of any real significance and going up it was hard but it didn't take my legs long to recover and fall back into the pace I had been running.  At mile 18 I remember thinking "Wow I feel really great.  8 more miles is going to be cake"  Ahh famous last words.

At mile 19 my guts started feeling..gurgly...My legs still felt good though, my breathing felt good.  I saw a porta potty sometime after mile 20 that was open and hopped in.  I was in for maybe a minute?  I didn't really keep track but I do know that when I got out my legs protested.  Apparently there were under the impression that the party was over.

I ate another Roctane (bad choice, I should have picked the peanut butter GU, but orange vanilla sounded better at that point) thinking maybe it would help get some zip back in to my legs.  I gagged trying to swallow it (bad sign).  Pretty soon I was dry heaving.  I stopped and walked a couple of times letting the nausea subside, but every time I started running again it just came back. I decided I better just get it over with and made myself run until I finally puked.

There I was 22 miles in, puking my guts out.  Orange vanilla flavored puke.  I think I still had all the water in my stomach from the last 3 hours because there was a lot of it. A bystander came and asked me if I was okay once I was done and I told her I thought I was better now.

My guts did feel a lot better, but my legs felt stiff and sore.  I couldn't get them back on pace and they kept cramping up.  It was a little discouraging to have felt so great for so long and now to feel so crappy so close to the end.  Not to mention getting passed by the 3:40 and the 3:50 pace groups.
I was so determined to get in under 4 hours though so I kept moving as much as I could, although mentally I was feeling a little very discouraged.  I didn't just feel like I had hit a wall I felt like I had slammed into it repeatedly. 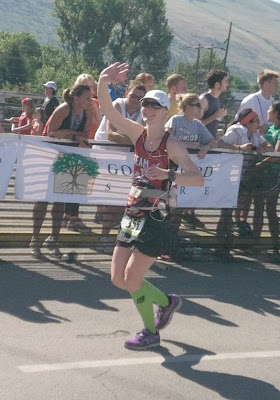 Finally I came around the last turn in the road to the finish line where I knew my mom and kids were.  As my watch beeped 26 miles at me, as if on cue my quads cramped up.  I was not going to walk the last .2 (really last .3) and I hobbled (I felt like a duck running) across the bridge to the finish line. I still managed to smile and wave to my mom and the kids though.

I was so happy I had made it under 4 hours.  I was so happy to be done.  My daughter ran over to me and I picked her up and just hugged her and cried.  A race official sat me down and got me some water, Powerade and some ice for my quads.

My splits from the second half.  A little disapointing at the end, but it gives me something to improve on  :) 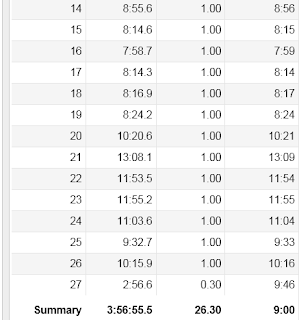 Elevation profile from the race.

The race was very well organized and coordinated.  The volunteers and water stations were all awesome. The weather was pretty good until about the last hour when it started to get hot. I think they had a post race festival as well, but at that point all I wanted was to take a shower and start the long drive home.

I did get this photo as soon as I got back to my hotel room, which graciously allowed for late check out for the runners. 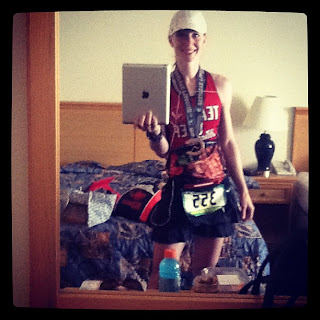 Posted by Christy @ My Dirt Road Anthem: A Runner's Blog at 9:22 AM