Finding Some "Super Speed" in Slovenia

I asked my little sister Jessica to write a guest post about her latest and 2nd half marathon in which she got an amazing new PR.  Here it is!

Almost a year ago I had a 6 month old plus a preschooler, along with the added stress of figuring out 2 kids (1 that didn't sleep well) I was lonely and NEEDED adult conversation especially during the day when my husband was at work.  To top it off I'm in a foreign country with no family around to help out.  Then one of the other American ladies here asked who was interested in training for a half marathon in Vienna.  At first I thought NO WAY, I hate running! My husband and sister both encouraged me to do it.  I obviously gave in, to be honest mostly so that I could be around other ladies and hopefully lose the last few pregnancy pounds!  I'm so glad I did, I now love running.  I love the way it makes me feel.  Strong. Capable.  Determined.  Alive. Healthy.  Happy. Ready to face my kids again :)
My first 1/2 was in April in Vienna, Austria.  Sadly I missed my goal time (under 2 hours) by 16 seconds, ugh, who does that?? 16 seconds!  I was pretty sure I'd be able to reach that goal this time and had a secret goal of closer to the 1:50 range as in 1:53'ish. Realistically I figured my miles would average about 8:30 to 8:45 minutes/mile.  I'm pretty sure the few days before the race my heart was speeding, I was a bit light headed and I obsessively checked the weather forecast.  4 days before the race was raining/snowing- ugh!  What to wear when it's cold and rainy?  I ended up following the guide Christy had posted earlier but I didn't have a vest so I wore an tight tank top under my top for added core warmth.


One week before the race I realized I had forgotten to pay, yikes!  The kicker with this is in Slovenia you have to walk your butt into a bank to pay for everything; phone bills, preschool bill, marathon fees...  you can NOT pay online like most normal people living in this day and age.  My husband always pays the bills downtown during his lunch break; downtown is impossible to park plus I have a 1 1/2 year old with me.  I finally make it to a bank, wait in line with an impatient 1 1/2 year old only to have the guy tell me that it was not working.  Crap, maybe I'm too late!  F! F!  So I call the marathon people they first tell me that I'm late so I must pay 70 Euros instead of 30.  WHAT?!  I'm not paying that!  I respond with "How the heck am I supposed to pay if I've been in America??"  Oh they say, in that case it's OK only pay 30.  I get back in line and repeat the sequence of before only this time the guy sends me in to an office for them to help me.  This lady only rewrites everything that he did and sends me back to the line.  Same sequence.  He tells me that there is no such account.  Impossible, I have the confirmation printout with all the information on it.  I call the marathon people AGAIN, they confirm my information.  I get back in line AGAIN, my son is starting to throw a tantrum.  I finally realize that they must be fat fingering the numbers.  This time I make the person verbally tell me the numbers they are typing in as I recheck them.  Problem FINALLY solved 45 minutes later.  UGH!
Another oddity , I thought it was weird that you weren't assigned a starting block, you got to pick which one you thought you should be on based on your projected finish time.  Okay... I figured I would start in the back of block 4, which was for 1:48 and below.  Yes, a bit out of my projected time but hey, its Europe and these people can be pushy plus I was told that everybody crowds up a block or 2.  Only the blocks weren't marked and nobody wearing the official race vest seemed to know what was going on so I just crammed in there somewhere, maybe in the 3rd or 4th block... I really have no idea but I didn’t get trampled so it must have been ok.
Saturday was the kids run which my 4 year old son competed in, wearing his batman cape for extra fast speed.  There were so many people crowding around I didn't even get to see him run :(  Afterwards he told his dad that he forgot it was a race and forgot to turn on his "super speed". 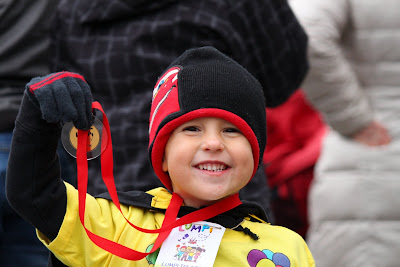 I was thankful that for this race it was in the town in which I live, Ljubljana, Slovenia.  I know some, maybe most, of you are thinking "el, jub el ja.. what??"  It's pronounced loo- blee-ya-na.  It a beautiful country, if you've never heard about it you can check it out HERE .  Anyhow Sunday morning was game time!  It was a cool 45'ish, overcast with a slight misting a rain.  It was perfect for running, not so perfect for standing but perfect for running.  Before I left for the race my son reminded me over and over again to NOT forget it was a race and to make sure I turned on my super speed.  I think I got the message!  I did not take my sister's advice of starting slightly slow with 8:45 to 9 minute miles.  Oops, it just felt like I was running so darn slow but when I looked down at my garmin I was shocked to see my pace at 8 min/mile.  How the heck?  I figured I would not be able to keep that up as I NEVER run 8 min/miles.  I tried to slow it down a bit but failed... I just felt so darn good. 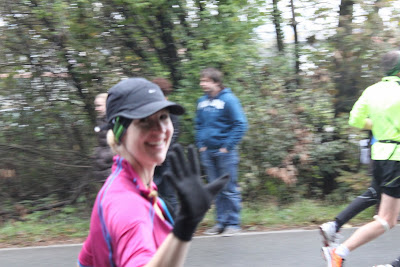 Around mile 5 I passed by where I live.  My husband said he'd be out there with the boys cheering me on.  When I passed by the appointed spot and didn't see them I was so bummed, my whole momentum felt like it toppled over.  Then, just when I'd given up there they were at the end of the street and my adrenaline kicked in again.  At this point I ate a bag of sports beans.  The miles seemed to tick off quickly, I couldn't believe how good I was feeling.  In the back of my mind I kept waiting for the wall to hit me.  Mile 9 I ate another bag of sports beans and continued to burp up the orange flavor for miles 10, 11 and 12.  Mile 12 was when the wall came down on me.  My legs were tired, I was exhausted but I couldn't stop now.  I pushed ahead for my fasted mile which was under 8 minutes (holy cow)! I think I gave it everything I had to run through the finish line, I even forgot to stop my watch for a while.  My watch said 1:51.  I was amazed. Thrilled.  A bit shocked. I felt like collapsing :) 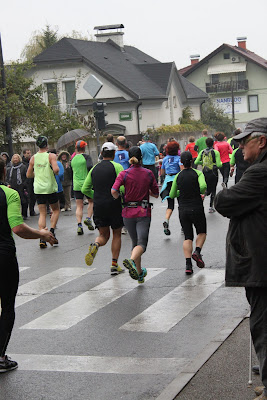 I slowly made my way through the banana/water/tea/cookie line, got my clothes then found some kuhano vino (warm spiced wine, yummy) as I was wet and freezing.  By this time they were starting to post the official times.  I let out a little "woot woot" when I saw 1:49:51 next to my name.  I had beat my previous time by almost 10 1/2 minutes!!!  Hell ya!  But wait, if I can shred my goal time by that much, what am I capable of?  What will my goal be for next time?  I'll have to wait until we get to Africa as that is where by family is headed to live next!  Anyone want to come and race northern Africa with me? 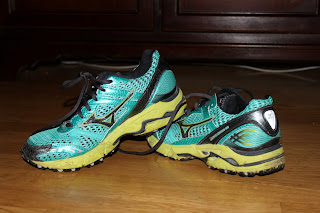 Jessica and her family will be moving to Tunisia sometime next year.  Better than that she will be here in Montana for the month of December.  I am so excited!
Posted by Christy @ My Dirt Road Anthem: A Runner's Blog at 1:15 PM