How Running Has Made a Liar Out of Me.

I ran 20 miles yesterday.  I have to admit starting out on that run was a little intimidating.  All I could think of during the first mile was "I am going to be out here for a long time!" 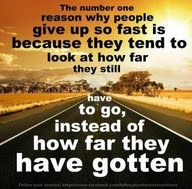 Eventually I got my mind off the distance to be covered and was able to zone out and enjoy the run, or at least parts of it.  20 miles is a long way to run.  Running for three hours is a long time to run.  The first time I told my husband how long I was going to be out running he looked at me like I was crazy.

I got the run done in just under three hours and was so glad to be done.  I came home and was starving. I ate mac and cheese with the kids and then thought maybe I was going to spew it.

I have 87 days to go until Missoula.  I wish it were a little closer, but it will be here before I know it.

There was a time when I thought it was crazy to be out running for more than an hour.  Over the winter an hour and a half run become pretty standard for me.

I remember when I first trained for a half marathon I kept telling myself I would do two half marathons that summer and then stick to 10k and shorter races the next year.  Those long runs were really killing me. Running 12 miles made my whole lower body hurt, by the end of the run I was so stiff I could hardly walk. Clearly half marathon were just too long for my body.

The next year (which was last year) I did do two 10k races, but they fit nicely into my half marathon training. I did two half marathons again last year, along with 9 other races.  I started thinking maybe someday I would do a marathon. There was no way I would consider it though until my kids were both in school.  Training for a marathon would just be too time consuming.

I felt like I really built up a solid base over the winter thanks to a pretty mild winter I got in a lot of runs and had a lot of 40 mile weeks, got in a couple of 13, 14 and 15 mile runs.  One day I decided to go for 17 miles.  A new PDR.  Three weeks later I was signed up for my first marathon.  My kids won't both be in school for another year and a half. So I am a little premature.

I also at one point told my husband I really didn't foresee me becoming a runner who traveled just to do a race.  That seemed crazy.

I found out about Hood to Coast.  What is a girl to do.  I am not about to pass up a chance to run an EPIC relay and get to support the beef industry while I do it.  and well I guess I am traveling 6 hours to do the Missoula Marathon, but there weren't any marathons in my area until SEPTEMBER!

Has running made a liar out of you?
Posted by Christy @ My Dirt Road Anthem: A Runner's Blog at 2:23 AM