I dont think I hardly slept at all the night before, I was so nervous about getting up on time and out the door by 4:30 am. I got out the door exactly on time after obsessing over the weather and trying to figure out why my laptop was giving me the black screen of death. Not good. I will have to take it in tomorrow and hopefully it is fixable, but it does not look good.... Anyway...there are worse things.

It was a little chilly when I got to Red Lodge where the shuttle would take us to the start line, I was about half a hour early so I hung out in my car for awhile and then wandered around until I found some people I knew and before I knew it we were loading the bus to the start.

It was cold up at the start. I stood around for shivering and finally took off for a warm up run. The sun came it and I stripped down to my tank. I was later very glad I did, a lot of others kept on their long sleeve shirts and I think we're sorry later. I also wore my fuel belt, there was mention of a water stop halfway through, but I never did see one. I ate a chocolate gu ten minutes before the start and finally it was time to go!

I was unsure of how to pace myself for a 9.3 mile race, so I was thinking just faster than half marathon pace, about 7.20ish. My first mile was fast and I wondered if I should slow down, but I was running with another girl whose name I never got and she was setting a fast pace. It felt good though so I decided to stay with her as long as I could. Four miles in we were still running sub seven miles and I ate a Roctane, and drank some nuun. I was worried doing this would throw off my pace and I would lose pacer girl, but I actually sped up as I did so. We made great time and passed a number of people.

Just after 4 miles in I noticed she started slowing a bit. This bummed me out a little as I really felt like she was helping push me, I stayed with her for a bit hoping she would rally and stay with me, but she kept fading.

I didn't. I kept going pushing the pace as much as I dared.

I had no iPod with me and was worried I would lose focus or motivation, but I never did. I kept repeating my mantras and focused on the guy in neon yellow in front of me, slowly, slowly I reeled him until with one mile to go I was on his heels. I passed him several times and was really hurting the last mile, I don't think he liked getting passed by a girl in a skirt. He would speed up and pass me back. I was also getting hot. It was now 55 degrees and sunny.

The course was downhill, but with lots of rolling hills and I was told once I hit town it would be all downhill, so imagine my disappointment when I noticed a slight up hill once I got halfway through town!  I do recommend this run though.  Beautiful scenic views from the Beartooth Highway.

Funny thing is I think I beat him at the end, but I couldn't tell you that for a fact. I got over the timing matt and sprinted to my biker Troy, handed him the timing chip and he was off. I had a great time hanging out at the finish cheering on the other runners.

My favorite mantra for this race was:  Make this moment count.

But mostly "make this moment count", kept me focused and motivated. I felt great and was glad I decided to rest Friday and Saturday even though I hadn't planned to.

9.3 miles in 1 hour 5 minutes and 16 seconds, per my Garmin.  I don't have the official time yet.  I didn't hang around for the festivities or the rest of the bike or paddle portions.  I had to come home to take care of two little people  :)  Automatic race distance PR since it is the first time I have raced a 9.3 mile race. 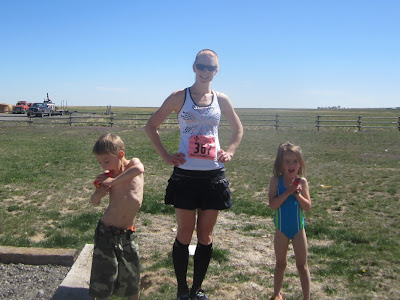 They made me chase them with a water gun when I got home.  I was already worn out from the race, but how could I say no?!

I will post the final placing for my team as soon as I find out, but I wanted to get my part down while it was fresh in my head.  I know I was the second girl in, but that is all I know at this point.  So excited to find out how my team mates did! 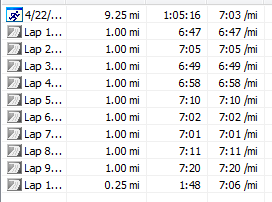 Posted by Christy @ My Dirt Road Anthem: A Runner's Blog at 1:08 PM