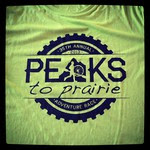 I had to get up at 4 am Sunday morning to get to Red Lodge in time for a 6:20 shuttle bus ride to the starting line. Which, sadly, wasn't really a problem since I have been awake since 2:30 AM anyway. I hate it when I can't sleep!

I listened to Marathon Training Academies Boston tribute podcast on the way up on the drive and it made it go by very fast. If you don't subscribe to MTAs podcasts you should this one was very good and I found myself in tears several times.

I got to red Lodge at about 6 AM. The weather was 43° overcast and slightly windy, but I would call it pretty darn awesome running weather!  The bus left at 6:20 for the start of the 9.3 mile run and we got up to the starting line at 6:42 which left us with about 50 minutes to stand around, get warmed up, and pee three times before the race started.  There were only two (Yes two!) porta potties for over 230 runners.  FAIL.  I used the porta potty once and the woods twice. (I hydrated a lot on the hour and a half drive.)

It was a little bit chilly, but I was overdressed so I ran around a little bit warming up and at about 10 minutes to start time I went ahead and took off my warm up pants and jacket.  I debated on whether or not to wear the bolero, but in the end wore it.

I was a little apprehensive to start as my stomach wasn't feeling super great, and I felt a little hungry had eaten a bagel at about 430 when I left the house, but my stomach was starting to give me some  "feed me" signals.  so I ate a GU.  My stomach just felt unsettled though so I was kind of worried about stomach issues along the way.

The first mile went by pretty fast and pretty close to where I thought it would be I would be at 6:46.   I was running with another girl for the first mile, but I started to feel her falter after a bit and I was determined to try to keep my miles under 7 minute miles and soon she fell back. Boo, I was kind of hoping she would help push me along.

Somewhere in I believe the second or third mile I got passed by two girls one of which reminded me of a bunny hopping.  She had a very hoppy sort of run. I imagined her feet were two rabbits hopping down the road.   I thought maybe that would wear her out and eventually I would pass her back, but I never did.  Apparently it works really well for her.  Maybe I need some rabbitty feet.

A pack of four guys ran past me somewhere in the third mile and I tried  to stay with them for a wind block  as we had a bit of a headwind, but they kept pulling farther away from me and were going faster than I thought smart for me to go.  It wasn't long though before we went around a corner and lost the headwind for the rest of the race. I eventually passed one of the girls that had passed me.

As we got closer to Red Lodge I could see the pack of four guys breaking up and that got me motivated to try and catch at least one of them.  I caught and passed one around mile 7 and zeroed in on the next one.  I passed him around mile 8 and started looking for the finish line.

My legs were tired at this point. I wasn't sure I could keep holding on to the pace and my head was trying to tell me it was okay to walk if I wanted to, I had put on a good fight.  HA!  I don't think so.  My fighter side came back with "I am stronger than that" and I didn't walk. "I am stronger than that" became my mantra for the last mile of the race. My goal for the last mile became to finish it faster than I did last year (I did it in 7:20 last year), 7:06 this year.

I finally went across the finish line and my Garman said 9.37 miles, one hour 5 minutes and 22 seconds, with a 6:58 average split time.  woohoo!  faster than last year.  There was a detour this year that made the course .12 miles longer.  Last year I averaged a 7:05 average pace, so not a lot faster, but faster is faster :)

Overall I would say it was a great run and I am happy with my time. There is about a 900 foot drop in elevation over the course of the nine miles, so it is a fast race.  There are a few uphill portions also, but nothing too crazy.  All that downhill though is a quad shredder!  I am so sore today, but such a good kind of sore!

I watched a few more runners come in and then headed off to the next transition to watch my biker come in and my paddler person take off.  We ended up 6 out of 13 teams in our division.  I didn't really care where we placed, I just wanted to run it and have fun..I would say mission accomplished.

There were more celebrations afterwards, but I had to rush off to a 4-H park clean-up day with my family.  After that we went to my Aunt and Uncles house for some fun riding in his horse and buggy and a pancake supper with lots of cousins.

I tried to dictate this recap using my blogger app on my iPhone, but it was almost more work than it was worth.  I had to do a lot of editing.  I ended up with a lot of sentences that made no sense like this one

I have no idea what I was trying to say with some of that.  I think the blogger app made some of it up. "my benefit is a reluctant hell"  ??? "the Dullaghan"  ???