I feel like I have been having some really good runs lately, running feels like it is clicking,  That said I was a little but unsure of how I would do in a 5k.  I haven't done a lot of speedwork this spring.  My last 5k was Thanksgiving and I ran it with 6:59 average min/miles so I figured I could probably pull that off.  I do remember that for that 5k I was sucking some serious wind and nearly puked at the end.

I had a hard time getting real excited about Ryan's Run, don't get me wrong I wanted to do it, but usually I have everything laid out the night before and Saturday morning when my sister showed up at my house to head in to the race I still didn't have all my gear together.


We got to the race with about 40 minutes to spare, plenty early!  Once we started warming up a little I started to feel more motivated, and excited..finally!  I took of my jacket and left it in the car and did another little warmup loop, then I really started to feel geared up..race time!

Pre-race with my sisters. 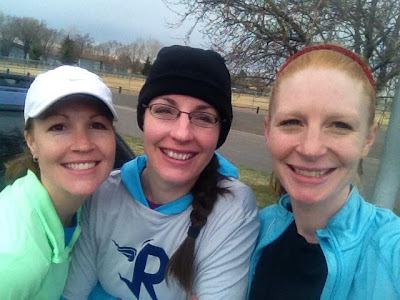 There was a little confusion over where we were supposed to start and we were herded back and forth a couple of times until finally they got it figured out and we were off.

Mile one 6:44,  I worried this was a little fast, but I figured I could still hold at least a 7 minute pace or just over and still keep my average under 7 minute miles.  I do have to admit though that I was feeling pretty good.

Mile two: 6:53, I was very happy with this, my breathing was still pretty steady and I was hoping to keep the last mile under 7 as well.

Mile three: 6:47..YAY, faster than mile 2 and while I was feeling a little tired I was still feeling pretty good.  There was a guy right in front of me during this mile that I was trying really hard to pass, but I think he was trying just as hard to not let me pass.  He told me afterwards that I nearly made him puke.

They even gave us these cool printouts afterwards if we wanted them..I did. 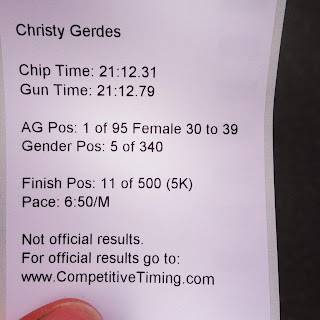 Awards were only given to the top three males and females, so I didn't win anything even though I won my age group...boo.  My Garmin had my pace for 3.12 miles at 6:47.  I was very happy with this.

What made this run so great was how good I felt, my breathing felt good and I didn't try to vomit at the end :)

My sisters after the race were talking about a pink house that was along the route but I never noticed it, I think I was too focused and in the zone.

Overall it was a flat and fast course that was a loop.  There was lots of water, bagels and donuts afterwards and good prizes if you won (new Saucony's!). 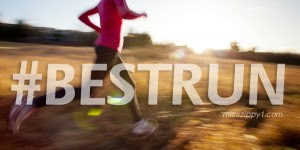 Posted by Christy @ My Dirt Road Anthem: A Runner's Blog at 5:35 AM