I of course was busy weather watching the whole week before  to see what I should wear for the half marathon.  The forecast kept coming up rainy.  and then it kept forecasting Sunday colder and colder.  Race morning showed up with 60% chance of rain, 16 mph winds and 45 degrees.

Hmm what to wear! I had a long sleeve and a short sleeve shirt picked out as well as tights and shorts. 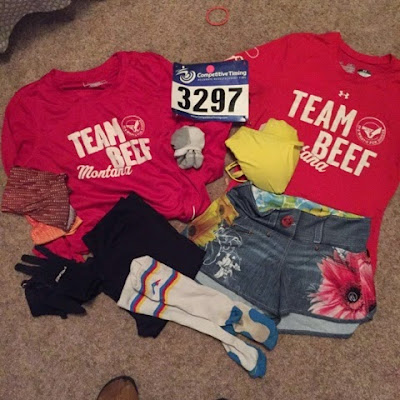 45 is normally shorts weather, but with the wind and rain I decided to wear long sleeves and tights.  I threw on some gloves, a buff over my ears, and a rain jacket.  I don't like to be wet and cold.  I think for a 5k or a 10k I wouldn't have worn the rain jacket, but I was glad I did for the half as it rained nearly the entire time.

First a little about the race. RUN for heaven’s sake is a 5k,10k run/walk & half marathon to benefit The Ramsey Keller Memorial. They pay for funerals for babies under the age of one (categorized infant death) in the state of Montana. Something worth supporting. No one should have to worry about the cost of burying an infant. So crappy weather or not I was in!

Okay.. on to the race!  There were only about 55 people entered in the half marathon and it started an hour before the 10k so parking was a snap.  I parked close to the porta potties, cycled through them once and then hopped in a vehicle with my friend Jaydee who was also running it and we visited for a little bit until it was time to head to the start line.  Jaydee and I went to high school together and went to state track with our 400m relay.  Now our kids are in school and 4-H together.  In fact, my daughter thinks her son is quite dreamy.

The gun went off and so did all the little beeps as everyone started their Garmins.  The first part of the race is uphill. Not my favorite way to start a race, especially since I hadn't bothered to warm up.  I paid for the not warming up thing.   I think I was 2 miles into it before I felt like I had my breathing under control and wasn't going to die.  Maybe that also had something to do with the first mile being  all uphill and the second was mostly uphill too.


Happily after that there was only two uphills and it was all downhill until mile 8.  About mile three I had settled into a group of three people.  I was running beside another girl and right behind her was a man and was right on her heels.  I don't know if it annoyed her, but it annoyed me.  I could imagine him behind me like that and how I would want to stop running and make him run into me.

Could be I am used to running alone.  I decided to try and lose them, but the guy seemed to determined to stay with me.  and he was scuffing his feet.  I don't know how he had any sole left on his shoes.  It seemed like there was the longest boring straight stretch from about miles 5-8.  I would swear it felt more like 6 than 3 miles.

The rain that hadn't been too bad for the first half of the race, really picked up for the last half.  I was sorry I had taken my gloves off around mile 3, because by the end they were really cold and I knew it would be too hard to try and put my gloves on cold wet hands while running.

Towards the end of the course we started intersecting with the 10k course, for the most part the route was well marked, but there were a few spots I had to stop and ask the course guards which way to go.  I could only see one other gal in front of me and if that part of the route was twisty I wasn't always sure where to go.  We joined in with the 10k and 5k runners with about a mile to go, which I found motivating as suddenly there were people to pass.

The elevation profile of the race. That uphill finish hurt!

The last mile was tough so all that motivation was helpful!  My legs were pretty shot from the hills in the last part of the race.  I ended up hitting my D goal for the race, which was to just run it faster than my last half marathon and I did by two minutes on a tougher course.  I ended with a time of 1:43:12 and a pace of 7:52. 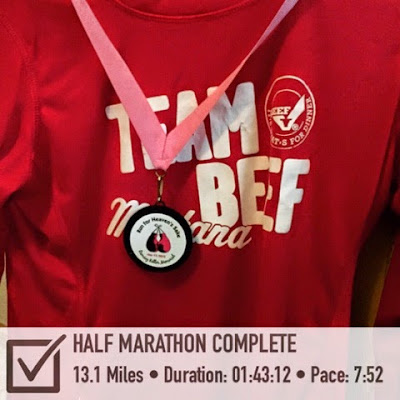 I didn't stick around long after the race.  I found Jaydee and we talked for a bit and then I went to my car and changed into dry clothes and just sat there with the heat blasting for about 20 minutes before I drove home.

I made a big pot of soup once I got home, and then caramel rolls.  I helped my kids clean their rooms, swept, vacuumed, did dishes, started to do laundry and decided no way!  I grabbed my book and read for awhile instead, it was time to get off my feet!

and just a picture from my run Saturday because it was so pretty. Linking up for Race Recap fun

Anyone else do a race this weekend?  How did it go?
How easily annoyed are you by noisy runners during races?