Well I dusted off the keyboard, I guess life has been busy and blogging has been neglected! I decided rather last minute to sign up for a 5k on Sunday. I haven't thought a great deal about racing since I hurt my back and had to miss the half marathon I was signed up for in March.  Running has been picking up nicely though so I decided to go for it.

Sunday turned out to be a cold, windy and rainy morning. Although really at 45 degrees the temps weren't bad it was just the wind, and rain and no sun. The Run for Ryan helps raise money and awareness for SIDS so it is a great cause.

As soon as I saw the course routes for the 10k and the 5k I was immediately glad I was signed up for the 5k.  The 10k was an out and back with the out being uphill and as it turned out into the wind and rain!  The 5k was a bit of a loop and only into the wind for a mile.

I ate my usual pre race bowl of oatmeal with chia seeds, cinnamon, and chopped almonds.  I was all out of raisins.

I was a bit undecided about what to wear but picked out shorts and a tank, Thankfully I also packed a pullover and I wore it.  That wind and rain just made things cold.  I got to the race and discovered I had left my race bib at home.  ARGH!  Who does that?!!

Thankfully its a small race and they were still doing registrations that morning, they gave me another bib number and fixed it in the system.  Disaster easily averted.

I didn't set any goals down on paper but in my head hoped at least to have a 7:20 or better pace.  Super awesome goal time would have been closer to a 7:00 pace, but since I haven't done much speedwork lately I was not really expecting it.

The gun went off and we took off. A quick glance down at my watch confirmed I was going out way too fast, but I quickly settled into an easier pace. The first mile went by pretty fast, I knew from looking around that there weren't any local fast girls that I recognized so I thought that just maybe I had a chance of being first female.  I passed two girls in the first half mile and thought I was out in front for the females when I spotted another ponytail up ahead,  It was definitely motivating!  First mile 7:25.  A bit off where I wanted to be, but given the wind and uphill I am okay with it,

I slowly inched up on the ponytail and by the middle of the second mile I had caught up with her and I had visions of winning. She was tough though and seemed to have lots of course support. Her dad was everywhere in a minivan yelling at her to keep pushing.  I traded spots with the ponytail several times back and forth, but it was a little bit like she was playing with me, I would stay in front of her for about 10 steps and then she would sling shot past me.  Second mile:  7:14  I really would have guessed this one was faster.

The third mile 7:07  The ponytail started to pull away from me in the third mile. I was still feeling pretty good, but I was also pushing about as hard as I felt I should. I was very happy to see the finish line coming up!

The ponytail's dad came and thanked me for pushing his 10 year old daughter during the race. Yep, I got beat by a kid.  What an awesome little runner she is!    I did end up 2nd female and I won my age group which they had grouped as 20-39.  I waited around with two friends to see if they were going to do awards, but then found out they were just going to mail them. Boo.  It will be fun when I do get it in the mail later though!

Complete fail on the getting any pictures though. 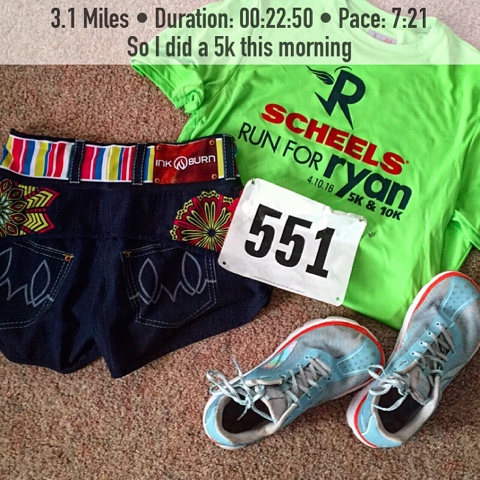 I have a 5 mile race and possibly another 5k in May, hoping to find another race in April also. I think I have missed it!

feel free to check it out and join in! The purpose of this link is to connect with and support other active women.  You can summarize your whole week or just a small portion of it.  It's up to you!  Race recaps are also encouraged!   {See complete rules}
Posted by Christy @ My Dirt Road Anthem: A Runner's Blog at 5:15 AM