Happy Monday!  I was so excited last night for the premiere of a new season of the Amazing Race.  I think that show would be so FUN to be on, unless I would have to bungee jump or eat something really gross.  And coming later this week is all new Survivor!  Yay for fall TV!

A friend sent me a few pictures from the race Saturday.  This was coming towards the finish line, I was pooped!  I thought I did worse than last year at this race, but I went and looked at my times yesterday and turns out I was faster than year.  I like it! 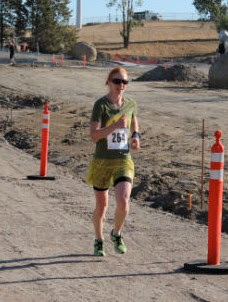 There was a tornado last Father's Day in 2010 at the race location which is also the county fairgrounds so they are just finishing up repairs to the parking lot.  I think everything else has been fixed.  Montana isn't really in tornado alley but we get them occasionally.  No one was hurt and it ripped the roof off of the arena.  Luckily there was nothing going on although the night before there had been a big concert.

And a daily reminder to please send me a vote for Team Refuel.  I feel like such a pain in the ass begging for votes everyday, but I really want this!  Go HERE, put Christy in the search box and click on me (I am wearing a bright yellow shirt) and then the VOTE button.  THANKS A MILLION!!  I appreciate every vote. You can vote once a day until October 15th, which seems like forever from now but I know will come really fast.

I just noticed I lost a follower..boo.  Too bad for them I have some fun giveaways coming up soon! I guess you either love me or you don't  :)

What fall TV show has you most excited?
It's a toss up between the Amazing Race and Survivor

Anything fun over the weekend?
A 5k race!

Does it make you sad when you lose a follower?
Maybe at first but I do understand. I have dropped some blogs too along the way.  You can't please everyone!

Posted by Christy @ My Dirt Road Anthem: A Runner's Blog at 8:03 AM