This first picture is about a quarter of a mile from the starting line.  I think it would have been a pretty good picture IF my EYES would have been OPEN!  I looked up and smiled for the photo guy right after this but just as I did he put his camera down.
Bummer 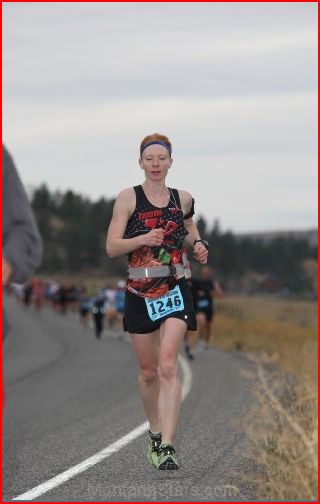 The next two pictures are about 4 miles from the end.  I don't remember exactly where, but I know I didn't put on my sunglasses until the last 5 miles.

I was starting to feel tired but also holding a blistering (for me) 7:14ish and under pace. 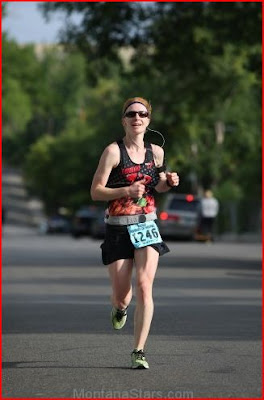 Aww I almost smiled in this one.  I was having so much fun! 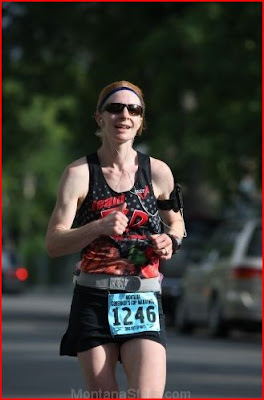 And coming in to the finish, the kid behind me almost passed me, but didn't.  HA! Although I think another 10 feet and he would have.  Close call with almost being duded! 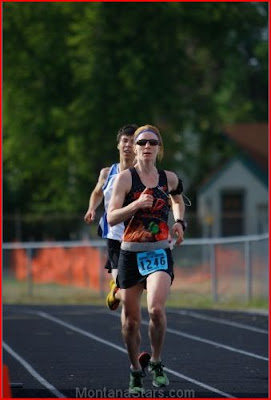 Another thing I forgot to mention in my race recap was that tons of the volunteers along the way were dressed up in Halloween costumes.  It made it so fun to run along and see all the fun costumes on the road guards and water station people.  Awesome touch awesome.

There was also something that happened to me at mile 4.12 that I meant to remember, but I can't.  I can only remember mile 4.12.

I do recommend this course for anyone wanting a fast time or a personal best.  It is mostly downhill with 3 areas of uphill they aren't that rough.  You could tell the people that weren't used to training on hills.  I passed quite a few people going up the hills.  YAY for all the hills I run on!

Please don't forget to vote for me on Team Refuel HERE if you have a spare minute.  Your votes are making me so happy.    Thank you all so so much!

Posted by Christy @ My Dirt Road Anthem: A Runner's Blog at 4:01 AM