The first half marathon I ran I went out with pretty aggressive 7:20 splits for the first three miles.  My goal for the race was to finish close to 1:40, so the pace was ahead of schedule, but I had a hard time not starting out like a gazelle and why not,   I felt good, it was still fairly cool out and I was so excited to do my first half marathon.  I wanted to rock it.   6 miles into it I was struggling along with the rolling hills in the 75 degree and rapidly warming heat with 8:30 splits.  I had skipped the first water station that was three miles in and brought no energy gel with me.  I stopped and gulped the water great fully at the half way point and walked a little for the first time. I was being passed left and right. By the time I finished I averaged 8:47 splits, had walked some every mile and was very discouraged. .  I was hot, dehydrated. miserable and pretty sure I was never going to run a half marathon again EVER!  Why would I?  I was hating the run from even before the half way point. My time was 1:55:35.  Not a bad time I know, just not what I was expecting and I felt defeated mentally and physically.

Of course I did sign up again a week later for another half marathon in two months.  Why wouldn't I?  I needed redemption.  I needed to prove to myself I could do it.  I could run a smarter race and have a much better time.  I was not going to let one bad race ruin the distance for me. If so many other people loved doing it, surely there must be more to it than I had experienced.

I looked at all the things I did wrong
I revised my strategy based on research I did.
It also helped that it was 42 degrees.  I averaged 7:47 splits for a time of 1:41:07.  A nearly 14 minute PR.  AH redemption tasted sweet.  Suddenly I loved the distance.  I had felt great the whole way through. The slower start meant that a lot of people were ahead of me, but I steadily picked of women and was only passed the whole time by one other girl.  That felt awesome.

Sunday I have my fourth half marathon and you can bet I am excited about it!  It is the race that got my picture in Runner's World in July.  Do you see me in the blue shirt and hat on the right behind the sunflowers? 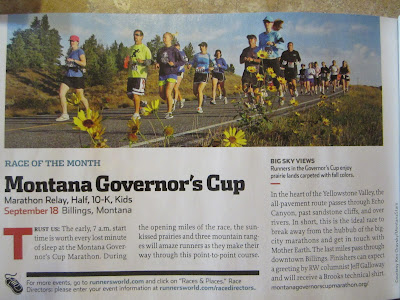 I applied for a Team Refuel grant and you can help me by voting for me HERE.  The voting period lasts a month and will run to October 15th.  So I will be begging for you all to send votes my way as you can vote once a day!  I encourage all of you to apply for the grants also.  I think they will have three more rounds of handing out the grants.  They can be for an individual or a team.   You would all make me so happy if you sent a vote my way!

Finally linking up with Fitness Friday Blog hop over at Life..As I see It.  Click here to check it out

And the moment you have all been waiting for (could this post get any longer?)  the lucky winner of their very own Aspaeris pivot shorts is...

could this be you?  Dog not included.. 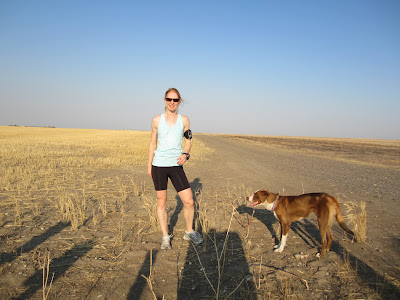 Plug in the numbers...hit enter 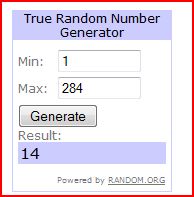 Christina is awesome, you can check her out here.  Besides being super cute she has a fun blog and has had some really great giveaways lately..  None of which I have won, but I won't hold that against her. :) Congrats Christina  (she also has a really awesome name)(I am really a Christina on my birth certificate but I don't know that I have ever gone by that name)

Tell me you favorite, best, craziest whatever racing strategy  for a half marathon.  If you have not ran one just tell me your favorite, best strategy for racing in general!
Posted by Christy @ My Dirt Road Anthem: A Runner's Blog at 8:50 AM