Today I Remember and am Thankful

Ten years ago I got up and got ready for work.  Just another day, a twelve hour shift in the operating room.  I went to work and took my lunch to the nurse's lounge and put it in the refrigerator.  As I turned to leave the lounge I glanced at the tv in the corner and saw the two towers with the smoke coming out of them.  I remember my thoughts so clearly and vividly.  I thought huh that must be China (don't ask me why I thought it must be China) or a movie  or something and I went out the door headed for morning report. 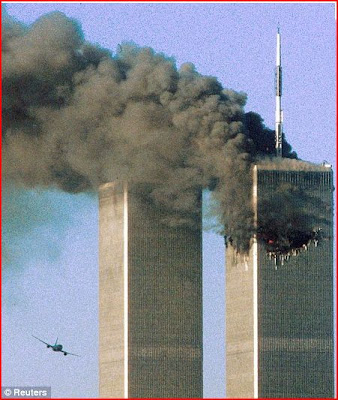 When I got there I heard someone say "One of the towers just collapsed"  I still didn't really register the gravity of the situation.  My mind was one the day full of total joint replacements we would be doing.  Another nurse came to report and told us all the other tower had collapsed.  It was then that I started getting that something serious was going on.  We tuned the radio in our room to news radio and listened to the news as we went about getting ready for the first surgery.  As we listened that morning and the reports came in about the crash at the Pentagon and the crash in Pennsylvania, I kept thinking "what next"?

It was a terrifying day and I was no where near New York, Pennsylvania or Virginia where the crashes happened, but I am an American and I still felt the terror of the day.  I still remember the footage of the people running out of the buildings and away from the collapsing towers covered in dust and debris with shocked and dazed expressions on their faces.   The sound bites from telephone calls from the doomed flight  where the brave people confronted the terrorists and crashed into the field.  The towers collapsing with all those brave firefighters inside.

Hard to believe ten years has already flown by.  Thank you to all who have sacrificed their lives in the war on terror and all who have worked so hard to make this nation safe for my children to grow up in.  Hugs and prayers to all who were directly affected by the goings on of that day and who lost loved ones that day or in the days since either in the war or from the aftermath.


“Terrorist attacks can shake the foundations
of our biggest buildings, but they cannot
touch the foundation of America.
These acts shatter steel, but they cannot dent
the steel of American resolve.
America was targeted for attack because
we are the brightest beacon for freedom
and opportunity in the world.
And no one will keep that light from shining.”
President George W. Bush
September 11, 2001

On a totally different note. The kids got to spend the night at my Aunts house last night so I got to just get up and go for a run this morning without any fuss or hassles  :)  Sometimes it is the little things in life that really make a day.  I ran an easy 4 miles and enjoyed the sun coming up, the coolness of the early morning air and spent time reflecting on the last ten years.   6 days until the half marathon!  YAY!  Now to start thinking about what I am going to wear.
Posted by Christy @ My Dirt Road Anthem: A Runner's Blog at 9:34 AM