1. My long run yesterday was "only" going to be 14 miles, 16 if I felt really good.  I did 12.  I felt like crap.  Every mile felt like it drug on forever.  Usually I start really warming up three or four miles in to a long run.  I kept waiting but the moment never came.  I ate GU, drank Nuun all the things that are supposed to help.  I had on compression socks and one of my beloved Lululemon running skirts.

Maybe it was the crazy wind, the muddy roads I was running on, or the fact that all I had for breakfast was a pancake which I KNOW does not fuel me good.  I didn't hydrate well before or the night before and halfway through the run was STARVING.  Whatever the reason 10 miles in I couldn't believe I still had 4 to go.

I decided at that point to do two more at call it a day.  As much as I HATED to quit before I had in at least 14 miles.  I had to question whether it was really worth it. 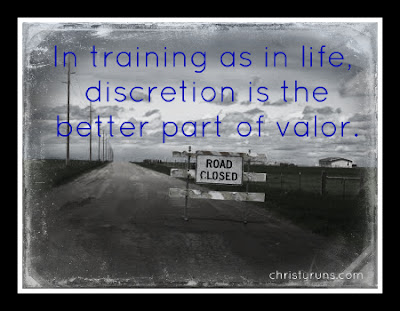 In taking stock of the situation


2.  The good in yesterday's run.  I have been struggling on and off for about 6 weeks now with hip pain and it is slowly getting better.  Yesterday was the third run I have had that was completlely pain free.  It feels so good to run and not have the dull nagging pain at the start of a run.  I can also sleep on the affected side again so I think (crosses finger) that it is slowly getting better.

3.  I only had to work Tuesday this week.  I had some days vacation days I had to use up or they would expire June 31.   I don't have anything planned other than doing some fun things with the kids like go to the park tomorrow and go on a hike and a picnic today.

Have you ever quit a run early because it just wasn't productive anymore?
Posted by Christy @ My Dirt Road Anthem: A Runner's Blog at 8:21 AM