Woke up yesterday to a very white world.  I should not have been completely surprised since it was snowing when I got home from work on Friday although by the time we went to bed all the snow had melted and it was raining.
Those two really flat bushes are my lilac bushes, luckily once the snow was shook off they perked up as did all of our young trees. 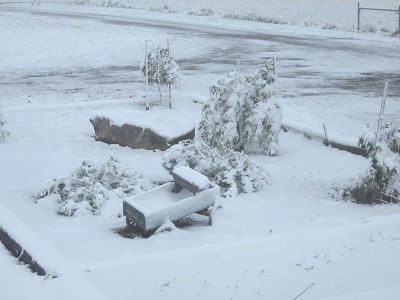 It has been dry here so it was easy to not complain about the rain, but snow..I have been over snow since February.  This is Montana though and I have seen it snow every month of the year except July so I it really isn't unusual.

It did make me a little cranky in the morning.  I didn't want to run in the snow and be cold.
After an hour spent helping my son clean and organize the mess that is his room I was hot and itching for a run.

The world I went out into was a little chilly, but I was perfectly dressed and found I LOVED the run.  It made me miss winter running.  There was very little wind and lots of fog. The picture below show how foggy it was, you can barely see the antelope staring back at me. 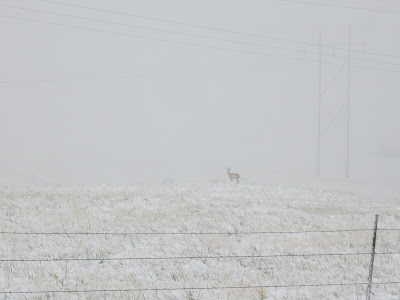 The flowers were so pretty all green and purple in the snow. 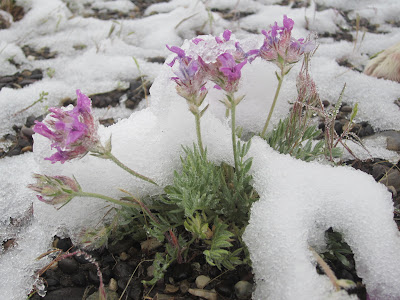 and the yucca about to bloom 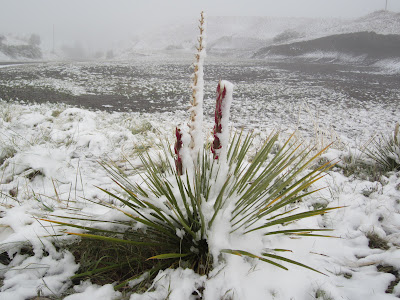 I ended up being so glad I went for a run (as always), it was a wonderful difference to the hot hot run I had Monday last week. I think I much prefer a 40 degree run to a 70 degree run.

I went early enough that the mud wasn't too bad on the road either, later when it warmed up some more the gravel roads got pretty sloppy. 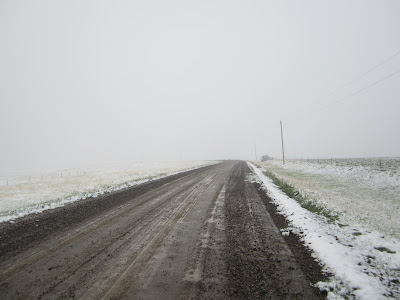 Other than cleaning my son's room, making breakfast and going for a run I don't think I did anything productive yesterday.  My husband even took us out to eat and then we took the kids to Cabelas to walk around and look at all the animals on display.

There was no snow this morning when I got up, but it was misting rain.  It is such a happy feeling on your face to run in.  Tomorrow I think the sun is supposed to come out and I am looking forward to that!  Three days of clouds and rain is about enough! I am ready for a little sunshine and putting my running skirt back on.