This is the second time I have done this 10k, it was my first 10k last year and it left me feeling a little humbled.  I went into it this year with a little more strategy..I think...

My plan was to not do the first mile too fast and die halfway through.  It is really hard since the course has a downhill start and everyone takes off just as fast as they can.  I felt like everyone was flying by me, and worried I was going too slow.

Mile 2 is harder than the first mile since it introduces some pretty good hills.  Okay really just one good hill and a couple smaller ones.  Time 7:24 and was wondering at this point if I was going to be hating the race later since I was feeling tired.

Mile 3 was pretty flat and I passed quite a few people that had started out too fast, but still was not really feeling the race.  Guessing all this marathon training has left me with tired legs..(ready for taper)! Time 7:20  Still behind goal pace :(

Mile 4 started another uphill portion and here is where I started feeling better, all the hills I run on were paying off as I passed another couple of people..including the girl who beat me by two seconds in a 5 mile race last month.  HA! Time 7:17

Mile 5 I felt pretty good here, the pace felt good and I continued to pick off another couple of people.  As soon as I passed someone I moved my eyes to the next person and reeled them in. It feels so much better to pass than be passed :)  7:07

Mile 6  We run up 4 levels of a parking garage.  Okay it might only be 3 but at this point in the race it feels like 10.  I was feeling good though and passed chicked three guys in the garage.  Then we come out run through a tunnel and hallelujah it is downhill the rest of the way. Time 7:18.  I really thought this mile would be faster, but I guess all that uphill in the garage killed me more than I thought.

I was thrilled to see a girl who always blows my socks off is now one age group up and I won't have her in my age group again until my birthday in November.  :)

They had popscicles, bagels, oranges, bananas, lots of water and even beer at the finish line.  There was also a health fair going on and lots with peanut butter sandwiches from Wheat Montana, Pop Chips, and yes even hot off the grill bites of steak.

I hung around after the race and helped at the Montana Beef Council booth passing out spice rubs, recipes and samples of grilled flank steak.

They had an awards ceremony only for the top finishers in the 5k and 10k, age group awards are supposed to be mailed out this week.

Overall a pretty great race.  Well organized, very well supported lots of volunteers and they had about 3,000 enter this year, which is a record for the race.  I give it a two thumbs up. 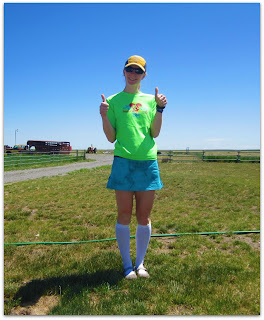 I also give a two thumbs up to my last LONG run before my first marathon :)  22 miles this morning in 3:18.  Feels so good to have it done.  I waited until almost 7 this morning to get running so that I could run in about the same weather I will be running in  (hopefully) in Missoula.  High fifties and sixties.

It didn't feel too bad.  I did come home and down two large glasses of ice water.  Nuun is great and all but I was craving water!

How was your weekend?  Did you race?