I seem to be having a hard time getting a Hood to Coast post done.  The whole thing is just so BIG it has been hard for me to wrap my head around putting it into a single post, so I have decided to break it down into two posts.  This first one will be the race itself and the second will be random things that happened along the way, some of it pretty funny. 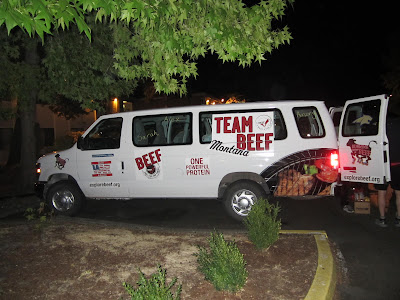 Our start time was 7 am so we had to get out of Portland pretty early and head up to the start.  It was easy to get up since we were all so excited to get started. I was out of bed by 3:45 and we were loaded and in the vans by 5 am.

We left our van2 at the first exchange and all piled in with van 1 up to the start to get pictures and pick up our race numbers.  It was easy to pick out my teammates from the crowd if I ever lost them because of the hats!

After seeing our first runner off we went down to the first exchange to cheer them on and then went grocery shopping and wait for our turn.

It was starting to warm up in the afternoon so I knew my leg, leg 11, which has almost no shade would be a HOT one. It was. Here is the crazy thing which I did NOT expect about Hood to Coast, by the time the first runner out of van 2 took off there were only 12 or so teams in front of us. Our first van had exceeded their expected times and passed a lot of teams. Not sure how many teams they started in the 630 and 645 waves as well as our leg at 7 am but there was some major roadkill by van 1. Good for them. Not so fun for us!

Now who were we supposed to pass?!

By the time that I was handed the wristband there were four teams in front of me. FOUR and 1,044 behind us wanting to pass us. Of course we would never see the vast majority of them any way due to different starting times but it feels cool to say.

SO anyway back to my first leg. I got the wristband and was feeling GOOD, fresh, fast, hydrated and READY.

First mile was 6:56. I saw no other runners the whole mile.

During mile two I finally saw another runner and she appeared to be struggling as it seemed to take me no time at all to start catching up to her and just before I passed her I saw my van go through a cross walk. That helped motivate me as I was starting to feel the heat.

The last part of the leg was all about bargaining, okay two and a half miles, piece of cake, 2 miles, this is nothing, 1 mile and a half, that is only three 800s and so forth.

WIth half a mile to go a cyclist rode by and told me I had about two minutes to go and my team was waiting for me. YAY, I powered through to the end and we hustled back to the van to our last exchange for the first leg. Finished with 7:12 average, I think it would have been a lot faster if I didn't have to stop at so many traffic crossings, but still happy with my time.

Two legs to go! The second and third legs will be much cooler and I am very excited about that!

I ran leg 2 sometime after 11 pm. It was dark, really dark and I had never run in the dark before so I was a little nervous about it. There were not a lot of teams in front of or around us so I knew I would be out there running by myself for a lot of it.

Krayton came in and passed the baton off to me and I was off. I felt good, really good. I knew it was a mostly flat and downhill with some hills in mile 3 so I was hoping for right around 7 minute miles.


I felt like I was going so fast and the world seemed to have shrunk down to just what I could see in my headlight beams. I liked it when I car would go by so I could see a little more around me. At the same time it was really peaceful. I just concentrated on following the white line.

I caught up with a runner in the second mile and passed three walkers along the way. Sometime during the third mile I started seeing what I thought was probably another runner up ahead so I started pushing to catch up with the flashing light.

It took me most of the rest of my leg to catch up, but I finally did around mile 4, by then we only had .2 miles left and she evidently hadn't been pushing as hard as I had because she really gave it the onion when she saw the finish line.

I nearly face planted right in front of the exchange when I was looking around trying to figure out where I was supposed to go and I stepped in a pothole. I recovered though and saw Amber. Whew! That would have sucked to face plant right there!

I loved running in the dark, I was wishing it would have been my longer leg, but that was my last one. I averaged 7:02 minute miles for this leg on 4.2 miles.

We hurried out of the exchange to go pick up our last runner so we could go and catch a couple zzzs before our last legs started.

I felt like I was able to catch a couple of hard hours of sleep and felt a lot better once I woke up. It started to get light about an hour or so before I figured I would start my last leg.

I still had to wear the reflector vest and lights

I was hoping to run 7:30 pace on my last run. 7.2 miles and rated hard. It was hard. After the first two miles I decided to try to keep it under 8 min/mile pace. I was feeling pretty tired.

The run was beautiful. The sun rose over the mountains and we had caught up with a lot of the walkers so at least there were lots of people to run by, it wasn't the same as passing another runner, but it did help. I never did see another runner on that leg.

I was pushing really hard, but my legs were feeling tired! So happy to see Amber and hand off the wristband for the final leg.

We all hopped into the van and raced into seaside to get to the finish line so we could run across with Amber.

Final time was 25 hours 27 minutes. About an hour faster than our projected finish time.

We finished 7th in our division mixed submasters and 86th overall. 86th out of 1070 teams. We were really pleased with our results and how everyone on the team did. and HUNGRY and TIRED!

We went into Seaside and found a breakfast buffet with seating available for our whole team. Score!