1. My little sister came up for pizza last week and promised to introduce us to a Tunisian style pizza.  I was a little skeptical since it was going to have tuna in it.  Surprisingly it was really good.  Sorry no pictures.  We ate it all.  It wasn't even bad the next day when I ate it cold right out of the refrigerator. We did leave off the egg.  I could handle tuna, but not so sure I could handle tuna and an egg cracked on top of the pizza.

It also had a spicy red pepper sauce on it called harissa.  The ingredients listed were :  a mix of red hot peppers, caraway, coriander, garlic and salt.  It was really good, but I don't recommend trying it plain.  Very spicy HOT!  It can also be be added to a little olive oil and then used as a bread dip.

The label had the writing in Arabic, French and English 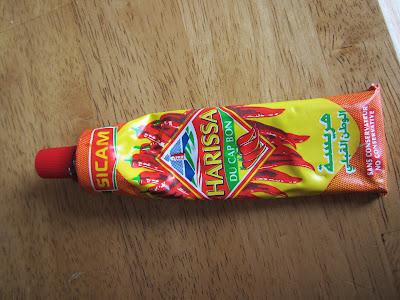 2. I broke down and ordered a new Lulu skirt.  Not really the right time of year to be doing that, I should be thinking tights, coats and hats, but well I had a weak moment one morning one the computer.  It is black just like three others that I have, but I was just thinking the other day I really wanted another black one... Now I don't have to think that anymore :)

I think it is pretty cute, and simple.  and I probably won't be able to wear it until April.  I am so not ready for winter.

3.  I haven't wrote anything about Rocky Ballerina One-Dot lately, but he is doing good and is fully in pouncy crazy kitten mode.  Your feet are not safe in this house.  We have a lot of fun laughing at his antics.  My husband keeps asking when I am going to transition the cat outside.  ... (flies buzzing sound)

He's like my baby, I can't just throw Rocky outside with my wildcats!

Remember when he was little and helpless?! 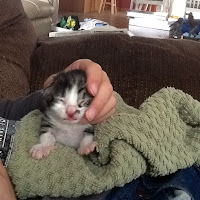 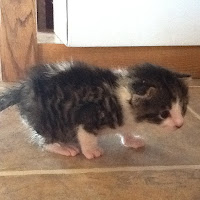 Look how big he is now! 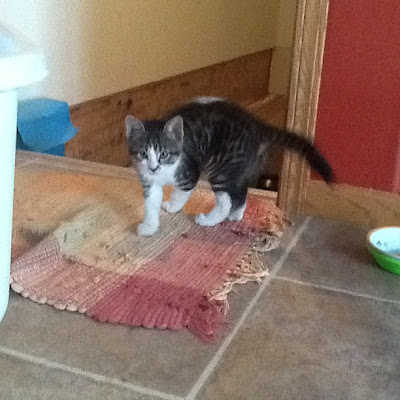 What is the strangest pizza you have tried?  Would you eat it again?