I had been hesitant to sign up for an adventure run.  Usually I am pretty boring and do the 5k.  I had planned on doing it again this year, but my sisters both signed up for the adventure run and I hate to be left out so I did too :)

It started out on the same course as the 5k and about 1 mile in we took a right and went down a big hill.  It was all on trails from here.  There were 8 obstacles

Run back up the big hill and merge back with the 5k runners back to the finish line.

I had a lot of fun and ended up being 2nd overall.  I wish there would have been a few more obstacles, but I do think I will choose to do the adventure run again next year. The worst part of the whole race was running past the sewer smell on the way out and back!  The hordes of gnats were pretty nasty in the first mile too.  I think I may have eaten a few.

I also committed a bit of a running sin.. I wore my race shirt for the race. So sue me.  I did it last year too.  and the year before.  I bet I do it next year too.  It is the only race I do this for so I don't feel bad about it.

My sisters did it too.  I forgot to bring my camera to the race, so here is a post race pic of my sisters and I and my niece Carter. 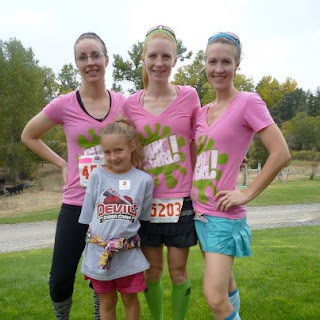 Email ThisBlogThis!Share to TwitterShare to FacebookShare to Pinterest
Labels: e