After a about two weeks of frustration I finally got my blog domain renewed and off the suspended list.  What a pain in the butt that was!  It was amazing how hard it was to get someone at Google Apps to a) reply to an email or b) provide a phone number to call.  I had the most luck by going through Go Daddy.  Someone from Google Apps finally called my yesterday and helped me through it.  Thanks Milton!

Fall is officially here and as you can see the hills around here have lost their greenness.  Cola and I went for a little off trail run Monday and I got my legs all scratched up on all the sage brush. 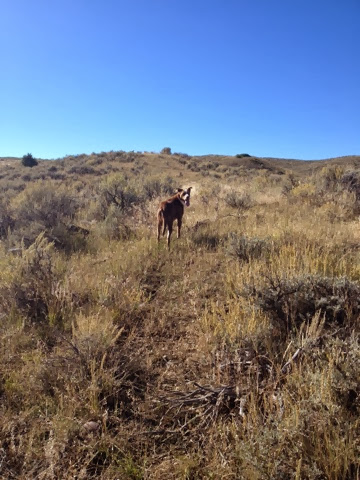 It was a beautiful morning and my favorite thing about off trail runs is not worrying about pace, just enjoying the run.  I also tend to get in a lot of hills when I do them so it can probably count as a hill workout too. 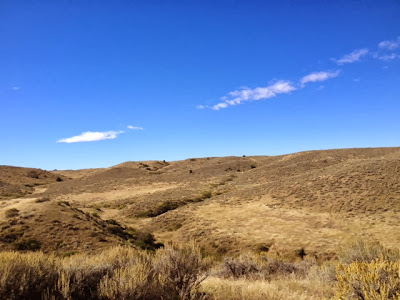 I was trying to decide where to cross a coulee at one point and decide where I wanted to go next when I looked down and saw a rattlesnake coiled up not even two feet away from me.  I had already walked past him at least twice.  Thank goodness he could have cared less about it.  He never rattled until I stopped and got out my phone to take his picture.  Even then it was the quietest of rattles as he slithered backwards away from me. 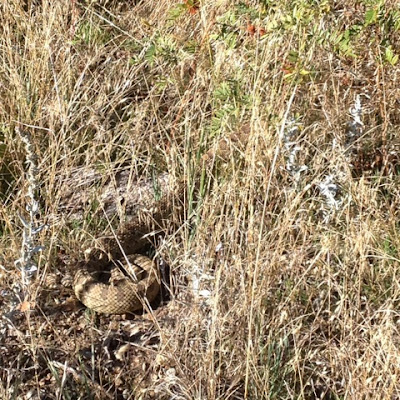 I have to admit that both Cola and I were feeling a little rattled (ha ha) and headed out of the hills after that.  When I got home and took off my shoes they were full of cheat grass seeds.  Nasty things. I took my socks off and another handful fell out of each sock.  Not sure I will be able to save the socks the cheat grass is so embedded in them. 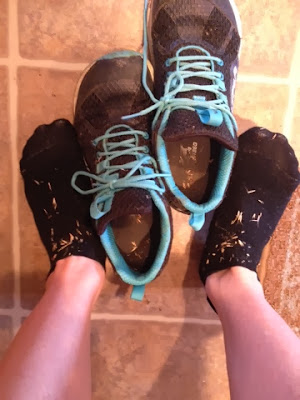 Yesterday was a no run day and I am hoping to squeeze a short run in today after work.

Have you ever had to toss a pair of socks after a run?

Posted by Christy @ My Dirt Road Anthem: A Runner's Blog at 5:18 AM