I had my butt kicked

Once I wrote a blog post about running in windy weather.  I wrote it because where I live it tends to be windy a lot and running in the wind is unavoidable. Yesterday was one of those very windy days and I had a long run to do.  Like windier than usual. I briefly considered putting it off for later in the week, but later in the week is all booked up.  There is no time for a long run later in the week.

Since I also had to watch Downton Abbey before I could go for a long run this limited my running routes as I now had no time to drive somewhere less windy and run.   To get to a less windy area I just have to drive about 2 miles and I am at a much lower elevation and less windy.    I could have run down the big hill, but the thought of running back up the big hill at the end of a 13 mile long run was somehow worse than running in 28 mph winds.

It still would have been windy down the hill, just not as bad.

So I made a critical error and I ran with the wind to start with.  Let me just say the last half of my run was about 2/3 into the wind and was incredibly mentally challenging. All because I wanted to run a loop type route instead of an out and back and out and back.

I kept thinking the run felt so hard and I felt so tired. I questioned how in shape I was.  I wondered it I was overtrained.  Then I turned and ran cross ways with the wind for a quarter mile and marveled at how good I felt!

I think the day would have been rather perfect for running if not for the wind. It was sunny and in the 20s.

That wind was a butt kicker, but I got it done.  Take that wind! 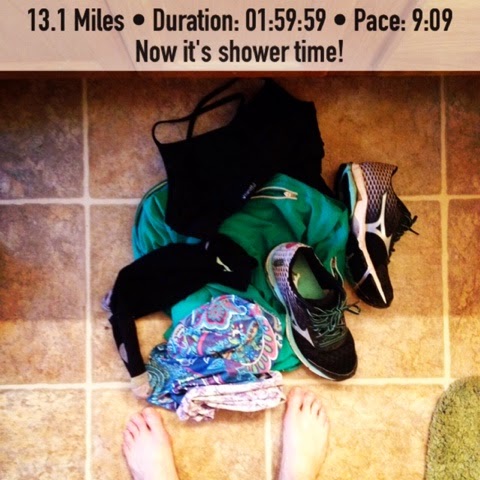 Now I wonder if maybe I should always run into the wind at the end, otherwise I wonder if I wouldn't turn around earlier if I had to run into it to start with on a long run.

What is worse than a long windy run to you?  Maybe if it were raining too.  I hate running in a cold rain.
Posted by Christy @ My Dirt Road Anthem: A Runner's Blog at 5:13 AM