Ragnar Northwest Passage: What happened besides the running

I meant to make this all one post, but I was so tired when I wrote up the first part I decided to save this for another day.  I wrote about the legs I ran at Ragnar Northwest Passage already here. I didn't get to all the other details though!

This year thanks to the Ragnar App, we never got lost in the van and thanks to well marked routes none of  our runners got lost either.  If you are doing a Ragnar I highly recommend the Ragnar App for leg maps and updates, as well as driving directions to each check point.

While we did not get lost, we did leave a runner at an exchange and had to turn around and get her.  Luckily when she hopped out of the van she had her phone with her.  In our defense, we thought she was in the back of the van sleeping. So when Sarah, who was driving, got the call from Evie and asked us why Evie was calling her, wasn't she in the van?, we were all a little confused. 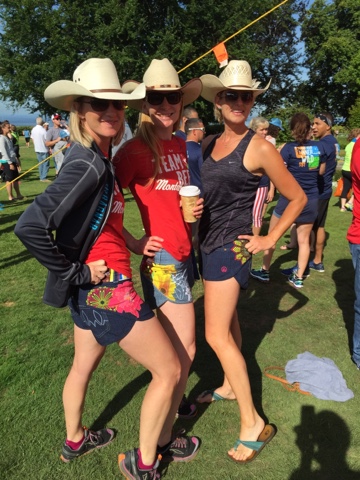 There was one new girl in the van this year and she just also happened to be a Christy.  I convinced her to go for a run with me in Spokane Thursday morning and had a fun time getting to know her better and talking running,

Four of us girls saw something very interesting and questionable in the night... we saw a runner quit running and get in a van and drive away.  WHAT!?  Yep. Four of us saw it happen. No idea if it was all the same team, different teams etc as a) it was dark    b)van wasn't clearly marked  c)no one got a look at team number .  It is a little discouraging though especially if this team placed high and didn't earn it.  Isn't half the fun of an overnight relay surviving all your legs and living to tell about it?!

We didn't stick around long at the after party choosing instead to hit the line for the ferry back to Seattle.  Lucky for us we only waited a very short time to get on, maybe 15 minutes.  I saw on Facebook later that some people had to wait up to 2 hours! YEESH! I was impressed with how fast the ferry ride was,

This is the third year we have done girls van and guys van for the team. I love it more every year.  The time spent with other women who come from similar backgrounds, live similar lives and are passionate about similar things.  Running, Beef.  Being healthy. Having fun. I have to admit having some withdrawals from them now that it is over.  No crazy drama, just awesome fun, support and good times.  I really love that I am a part of this group of dynamic women. 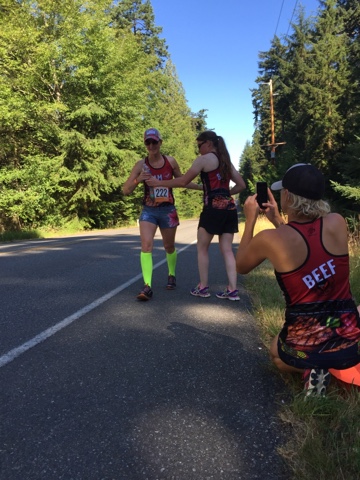 Before I was ever a part of this team someone and a baggie of smashed raw shrimp carefully placed just under the carpet in the back of the van at the start of the race which proceeded to make said van very stinky over the course of an overnight really started a tradition of van pranks.  You can read about 2014's pranks here, 2013's pranks here and 2012s pranks here.

We decided the boys needed to experience the condom water we went through in 2013 so we covered 48 bottles of water for their cooler with condoms.  Except I had bought lubricated so our hands were sticky and nasty trying to get them on.  The morning of the relay Sarah broke out the Liquid Ass and ran over to their van to spray some in. 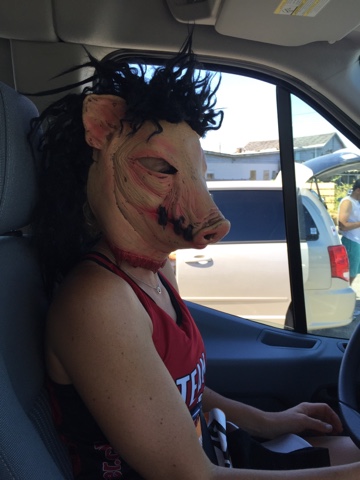 She got busted and in the battle that ensued had to change clothes. So did Rachel.  and we lost the bottle of Liquid Ass.  This stuff smells a lot like it sounds and drives fear into the hearts of anyone who has ever experienced it.  They were afraid of whatever else we might have up their sleeve and we were afraid of the Liquid Ass and a truce was called.

It was nice not to have to constantly worry about leaving someone to guard the van.

Also I tried a raw oyster for the first and last time. 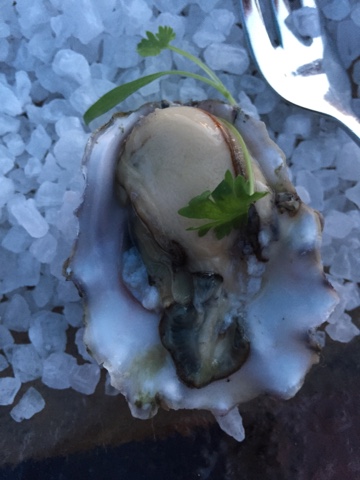 I would recommend this Ragnar! Northwest Passage was beautiful, had lots of awesome volunteers and seemed to be well organized.  There were some super tough legs,but it is always canceled out by the fun and memories made.

Posted by Christy @ My Dirt Road Anthem: A Runner's Blog at 1:42 PM