Heart and Sole 10k Race Recap and a PR by default 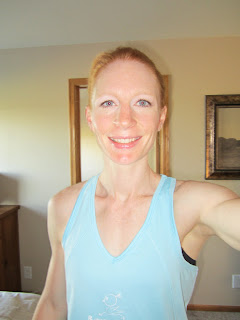 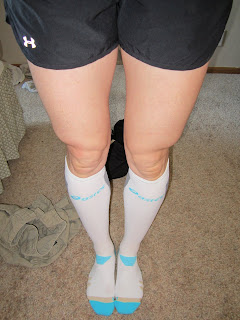 I got up early as usual and caught up on a few blogs before i started getting ready for my 10k today.  I decided to try out my new compression socks since my right calf has felt crampy.  I don't think it really helped, but I guess I don't think it hurt either.  Here is a pre-race picture.  Look at me all bright eyed and bushy tailed!  The race was 8:45 and I wish they would have started earlier.  It felt like I had too much time to wait around, plus it started to get a little hot during the race.  I think an 8 o'clock start time would have suited me better, but they didn't ask.  Whoever they did ask had the 5k start at 8:30 and the 10k and 8:45 which seemed a little backwards to me, but once again they never asked me.  What do you guys think does this seem messed up to you?


My goal was to try and stay around  a 7 min/mile pace.  I wanted to finish around 44 minutes.  My Garmin time was 45:10. somehow the official time was 45:27, so not sure how that happened as I started my Garmin as I went across the starting line.  I do know that they never even had a time for the girl who won the 10k?  So I am wondering how messed up the timing was today.

Anyway the starting line is on a hill so the whole first part is downhill and right at the end of the first mile is a nasty hill.  I did the first mile in 6:38, I kept trying to slow myself down, but it was really hard.  I am a fast starter and am more used to the 5ks where it is just balls to the wall running the whole way.

Miles 2, 3 and 4  felt like they had a lot of uphill going on and I slowed considerably.  The route was straight for all of miles 2 and 3 which was really boring and a little hard mentally.  It just felt like we kept going and going.  The sun was really beating down and there was a pretty good little cross wind going on that made it feel a little harder.  At mile 3 we turned and started another uphill section that then wove through a residential area.

At mile 4 we were going straight again.  By this point my right hamstring and calf muscle started to feel a little crampy and I was tempted to stop and stretch it out, but I decided it wasn't that bad yet and kept running through it.  I was also feeling some dry heaves coming on.  I took some water at the 5 mile mark and that was a mistake as it only made the feeling that I was about to throw up worse.  After half a mile or so it went away though

Close to 6 miles we ran into a parking garage and up 4 levels of the garage, my legs were starting to feel like jello at this point, but as soon as we were out of the garage we were rewarded with a downhill all the way to the finish line.  Yayyy!!!

I grabbed a couple popsicles and headed back to find my sister to run in with her.  She finished in just under an hour!  Yay!!

I ended up 9th female in the 10k and 2nd in my age group.  I wasn't ecstatic about my time, but I am not disappointed by it either.  Best of all though it is a PR by default since it is my first one.  I am signed up for another one in August so I will have something to shoot for.  I am not going to lie, it was tough for a girl who is used to 5ks.  I think I would have been closer to my goal time if the course were flat.

Here is a picture of me running my sister in, you can't see my purple popsicle in my other hand, but it was soo good!  She wouldn't look at the camera...pooper pants. 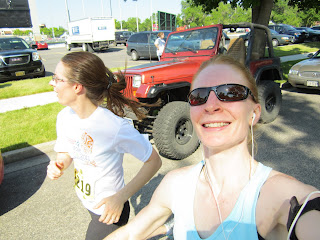 Now to try to figure out why my calf and hamstring on the right side are giving me grief.   I have the week off coming up, so I may try to get a massage this week and see if I can get it worked out. 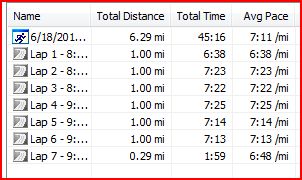 Here are the splits from the race from my garmin.  I am going to go with my garmin time for my PR and not their official time, which I think is messed up. I didn't stop it right away, but when I looked at it after I was across the line, it was at 45:10.

Last chance to enter the giveaway for Chocolate #9, did I forget to mention there will be 2 winners?  Yup two winners will each receive   3 packs of  Chocolate #9.  I will draw tomorrow around noon.

Only 5 more days until I find out if the Nuun people thought I was creative enough to be on their Hood to Coast Team.  Someone asked me about voting, I am pretty sure no one votes except whoever in judging the entries, but thanks for wanting to vote for me!  Everyone has been having a good laugh at my expense anyway if I don't win and if you can't laugh at yourself I think that is pretty sad, so I have been laughing too!

If I find any fun race photos I will post them later!
Posted by Christy @ My Dirt Road Anthem: A Runner's Blog at 3:34 PM