No muscles were hurt in the making of this post.

I love it when we ask me "Aren't you afraid you are going to ruin your knees with all that running?"  No I really am not and I found the science to back me up!  Granted that if you already are genetically predisposed to arthritis it is going to come anyway, but there is no real link between running and arthritis.   I found this great article on  Time magazine's webpage called Running Not So Bad For Your Knees.
It isn't the first time I have seen studies like that but I thought I would share it here anyway, basically it says that doing high impact exercises is actually good for your knees.  Researchers in Australia who did a study


"found that people who exercised vigorously had thicker and healthier knee cartilage than their sedentary peers. That suggests the exercisers may have also enjoyed a lower risk of osteoarthritis, which is caused by breakdown and loss of cartilage."

It goes on to discuss some other injuries like stress fractures and soft tissue damage, but the main point is arthritis is caused by genetics and obesity.  Running will not ruin your knees and is actually GOOD for for it!

I was supposed to work yesterday but ended up getting overstaffed...oh darn.  So I went for a run instead.  Yay

I did a few hills then threw in some 800 and 400 intervals. Did a total of 6 miles.  I was mostly just testing out my legs after the race Saturday and testing out running in my Tommie Copper sleeves.  This is how I feel about them and getting to run yesterday.  It was little hot out and smoky.  There are some fires on the Crow Reservation, which I live close to. 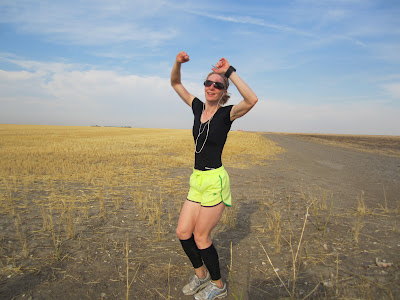 Yup they feel pretty good! Although as you can see by the end of the run I had rolled down the knee sleeves.  Here is the before picture, that was the after.  Sorry, sometimes I just do things backwards! 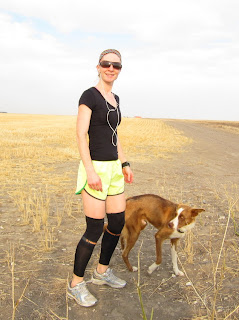 I got bored while using my self timer to take pictures of me in my sleeves and decided to see if a) could still do a toe touch and b) was able to actually able to get a picture of it.  After 37 tries I got this.   Not bad for an inflexible thirty-something mother of two.  Disclaimer:  No muscles were hurt in the taking of this picture.  I stretched before and after.  Yes I was a cheerleader in high school. 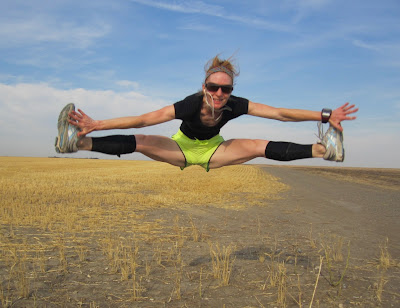 SO don't worry about your knee joints as you run today you are actually making them healthier! In case you cannnot see it, I am sticking my tongue out at all the running naysayers!
Posted by Christy @ My Dirt Road Anthem: A Runner's Blog at 5:18 AM