I did my long run today, but I waited too long to get going and about halfway through my run it just got too hot out.  I guess I should have started at 7 am instead of waiting until 8:30.  The sun was nicely hiding behind some big clouds until about 9:30 and then decided to come and get me.  I went through all my water by 8 miles, luckily I was near my house so I stopped and refilled.  I didn’t want  to resume running all that bad but since my kids and truck were at my Mom’s house I figured I had better! My parents live about three miles away from me and luckily it is mostly all downhill or flat to their house from mine.  I was so hot when I got to my Mom’s I downed an entire Sprite in one big gulp and I am not a pop drinker, but it was cold, handy, delicious and did I say cold?  So good.   I really hate running in this heat.  I think I would have been a lot sweatier, but here in MT we have dry heat and the sweat just seems to evaporate away.  I did get some running down my face, the dreaded boob sweat and sweat under my fuel belt but other than that I was dry when I got done.  I had a 14 miler on the books but cut it two miles short because by the end I was so HOT and was walking more than I was running anyway.

My Dad and brother have been very busy combining wheat.  I took the kids over for combine rides when they were just down the road from my house.  I was wishing I had someone to watch the kids for me so I could ride too. 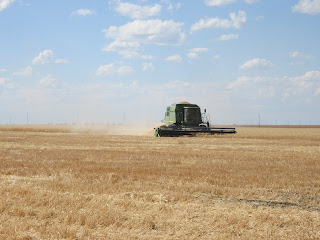 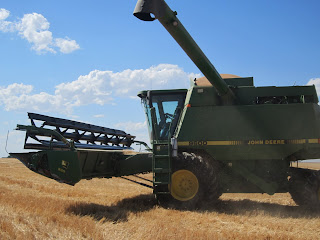 Really made me miss the days when I was little  and I rode with Dad in the combine.  Only the combine he had back then didn’t have a nice cushy passenger seat like the one he has now does.  I would sit on the floor and watch all the golden stalks of wheat get combed into the header of the combine and then I could turn around and watch the kernels of wheat filling up the back of the combine and the straw spewed out the back into neat rows.  I  also remember sleeping on the floor of the combine lulled by the lullaby of monotony and the hum of the combine.  Sometimes Dad would bring us in a handful of wheat kernels to eat.  If you chew wheat long enough it forms a sort of gum.  I was trying to teach this to my kids but they aren’t patient enough yet and just swallow it.  You can't see it, but my daughter is sacked out in the passenger seat of the combine here.  I guess the monotony and the hum of the combine were just too much for her too :)

I am going to get some wheat from my Dad so I can make some of my favorites. wheat salad, cooked wheat for breakfast and wheat chili.  So glad I am not on a gluten free diet!

My internet is down  L so I am typing this up on Microsoft Works and just going to cut and paste it over.  My garden is becoming very productive and recently I have harvested peas, zucchini, 1 cucumber, yellow squash, red beets  (YUM), and lots of lettuce.  Bags and bags of lettuce.  I might have over planted that a little, but I love fresh lettuce!  Coming soon will be carrots, green beans, acorn squash, more cucumbers, zucchini, pumpkins,  more red beets, and corn!  Gardens can be a lot of work, but also very worth it!


The Dirty Dash people sent out this email today,
Your sacrifice was laid upon the altar and your offering was found acceptable before the Mud Gods.
And while most of you were at that altar, you decided to exchange vows to become one with the mud: To devote yourself to it for time and all eternity, in good times and in bad, in disgustingness and in filth, to love, honor and cherish each muddy moment together till the showers do you part.
The sad thing is—at least two participants took this a bit too far, pulled out their rings to make it official—and lost them in the mud pit. I mean, I would agree with Meat Loaf, “I would do anything for MUD…but I won’t do that.”
If there’s one thing we’ve learned about Billings this year, it’s that it has 3 loves besides mud: beer, balloons, and booze. Is that only 2? I meant Bud. Same thing? I mean Brewski. Blue Moon? Blue Ribbon? I’m confused.
We’re no botanists when it comes to math, but try to disprove this equation:
(BEER + RUNNERS + MUD)^BEER = RECORD BALLOON SALES
You guys broke all previous Hog Wash records (probably cuz your aim got so bad), helping the Billings Family YMCA to raise $1500 in water balloon sales alone. You also donated over 1,200 pairs of shoes that will go to benefit Friendship House and Green Sneakers.
Billings blew us away and we can’t wait till next year when we’ll have more mud, more obstacles, more showers, and more of your friends that missed out on the inaugural running.
Not sure what the thing about the rings lost in the mud it was about, just glad it wasn't mine!  I do know two people went to the ER with broken ankles.  I guess that is why they have us sign those waivers!  I also know I am so doing it again next year!  If there is one near you...DO IT!  oh yeah and yay Billings for breaking the record on water balloon sales!
Check out the Fitness Friday Blog hop going on by clicking on the picture below.

Do you cut it short sometimes because of the heat? I do, I am a wuss!
Posted by Christy @ My Dirt Road Anthem: A Runner's Blog at 2:17 PM