I ran naked and it felt great!

Cola is a busy dog and sometimes that means he feels like he has to go play with the horses before I go for a run. Not a big deal if I am running from home, but if I am taking the kids somewhere while I go for a run it can mean a stinky dirty ride in the car.  The kids don't like to take him because, well sometimes the dog has gas.  Dog farts are just nasty. But how can I leave this sweet little face at home? 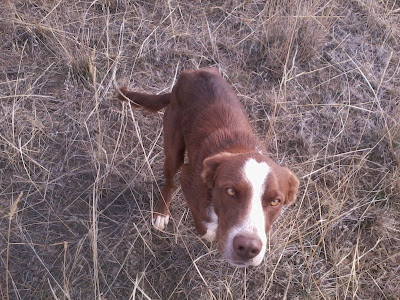 He just seems to know when I am going running and is the first to jump in the car when I open the door.  He is determined not to be left behind. Can't say that I blame him, I am pretty determined not to miss out on my run either. So we all just hope that Cola can hold it in a little longer.
Yesterday, I took the kids down to my parent's house while I ran.  Cola thankfully spared our noses.  I had just go the kids in the house and was talking to my Mom when a horrible gust of wind came up and blew over their grill outside and generally was making a mess of things outside.  We righted the grill and then ran back in the house to stare at the craziness going on outside.  My Mom looked at me and asked "You want to go running in that? "
"No" I laughed, but lucky for me the winds slowed down to a more tolerable level and  headed out the door only to discover..I WAS NAKED.  I had left my Garmin AND my Ipod at home.  Aack!  I briefly considered driving home just to get them but decided to just go for it.  I know the distances roughly and knew I wanted to run 6 miles, so off I went.
I was pretty good about not trying to check my watch to see my pace.  I think I only tried 10 or 20 times in the first mile or so after that I was good until I tried to pause it while I took a picture.  I couldn't believe how naked my wrist felt.  Funny.  I missed the Garmin way more than I missed the ipod, but it did feel good to not worry about pace and time and just enjoy the run, especially the last three miles when I turned around and got to run with the wind instead of against it!
Here is what I stopped to take a picture of.  There are lots of these rocks on my family's ranch and we had so much fun playing on them while growing up.  I always thought this one was really cool because it looks kind of like an Egyptian pharaoh.  Like it could be in front of a pyramid or something. 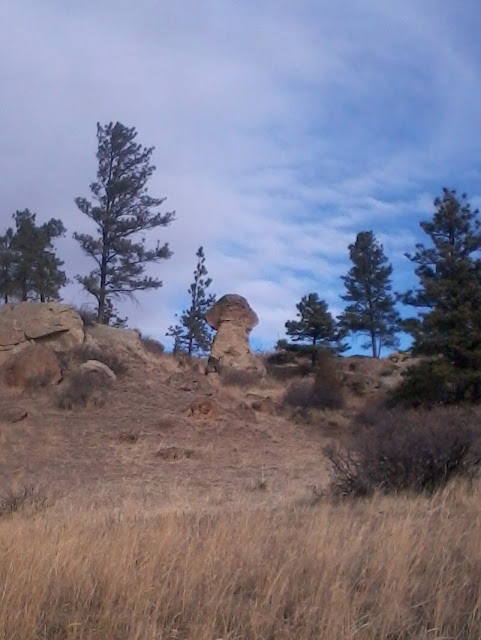 My run felt so good yesterday and when I got home I wanted to run again!  I did a Bodyrock.tv workout instead to work my arms and core.

I found out yesterday also that I get to be a Fitfluential Ambassador!  I am so excited about it. It looks like it is going to be a really great opportunity and I am the first one in Montana.

You can still enter to win a pair of BTB sunglasses HERE  Last day to enter is tomorrow.
Where was your favorite place to play when you were a kid?
Posted by Christy @ My Dirt Road Anthem: A Runner's Blog at 8:08 AM