I was pretty excited for the 5k, there were nearly 2000 runners entered, which is awesome considering it was the first year for this race.  Great turnout!  My goal for the race was to keep my pace in the low 7s , I wasn't really sure what to expect considering I have not done any speed work to speak of since mid September.  The first mile felt good.  Great really and I kept having to remind myself to slow down.


Mile 2   6:55
The third mile I was struggling.  It just hurt, I was starting to feel the lack of speed training and I was doing all i could to really hang in there.  My legs were tired, my breathing was struggling and I wanted to be done!

I pushed it the last little bit and finished stronger

They only did awards for the top three in each age group and the age groups were 30-39.  I finished 4th.  I am happy with my time considering the lack of speed work.  What it has done is rekindled my interest in doing some speed training!  YAY!  I just haven't felt like doing it lately, but doing this race reminds me how much I love it and I want to be FASTER!

I refueled after the 5k with an Island Necter Roctane and two cups of water, used the porta potty twice and visited with some friends until it was time to line up for the race

I was really nervous.  The girl who had finished right behind me in the 5k was doing the street mile too so it was fun to have someone to visit with while we waited.  I debated taking off my long sleeve shirt and running in my tank.  I didn't, I later regretted that when i got hot.

The first half mile I felt like I was floating, it felt great, I was loving it.  I passed a lot of girls and kids that started out too fast.  I didn't really have a goal time in mind but wanted to run it faster than 6:30.    From about the half mile to .8 miles I was hurting and struggling to stay under a 7 min/mile pace.  Right at the end a girl went sprinting past me and I struggled to keep up, friends on the sideline started yelling at me to run faster, she was going to catch me.  I didn't know who she was, but that was enough for me to kick it into a higher gear and finish strong.

My garmin said 6:35.  Just under my B goal.  Bummer.  Then I was kind of mad that if I had all that energy to kick it in at the end why hadn't I pushed harder sooner.  (Never mind that I was dry heaving as soon as I did get across the finish line.)

I just know I can do a mile faster because I have before during other races, but I'll take it!

My sister told me I was the second girl in, only the girl who had sprinted past me at the end beat me.  Cool!
So we waited for awards and when they got to top overall females for the mile the third place girl was the sprinter, the second place girl was Niki, who was right behind me and I thought what the heck?  Then it clicked and I looked at my also confused sister and said "CHIP TIMING" it was right there I realized I won!
I was 11th out of 281 total finishers.  I think their chip timing was a little off since they had my time at 7:01 and I started my Garmin right after the gun went off and stopped it right across the finish line.  Other people were thinking it was off too.

Woohoo!  I was so excited!  I won a gift basket of some yummy foods.  A pair of Redstar sunglasses.

The race bags had a great t-shirt, a $500 Redstar giftcard, and a lot of local and downtown Billings coupons and things in them.  Pretty good overall!  Check out the sunglasses.  I would not have picked out white frames, but I do like them and think they will be great to run in.  They are even polarized. 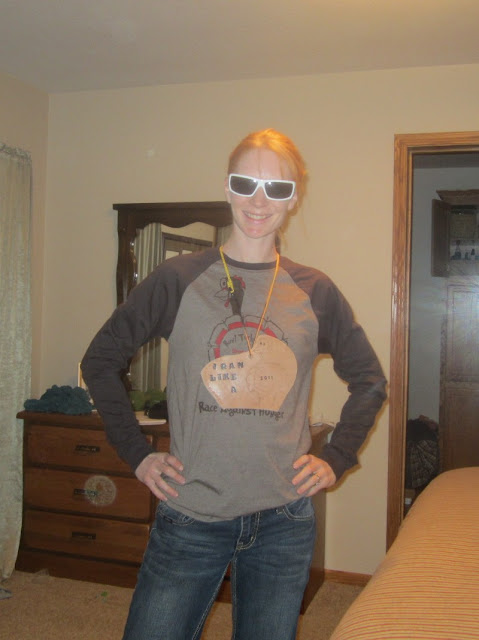 I seriously love the shirt, it is nice and long in the arms and the body, I love the colors.  Oh yeah and did you notice my "medal" for winning the girls mile race?  It is made out of a scrap of leather.  Very original! 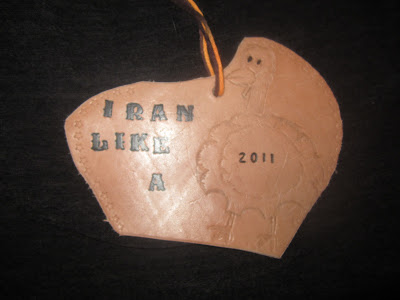 and we got finisher pint glasses, since I did both races I got two.  I had a glass of porter house ale when I got done.  It was pretty good! 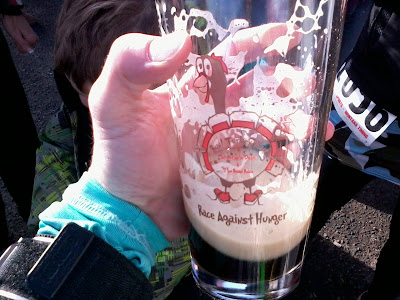 My only complaint about the race was for the 5k we ran a mile loop then started over so that we started running into walkers during the second mile who were doing their first mile and they were spread all over the street so that we had to weave through them.  Very aggravating especially when one stopped right in front of me and I nearly ran into her.  I may have cussed as I performed evasive maneuvers to avoid a collision. oops

Hope everyone had a great Thanksgiving, I know I did!
Posted by Christy @ My Dirt Road Anthem: A Runner's Blog at 8:35 AM