Welcome 2012 and Monday Motivation, and some winners!

2012 is here and I am looking forward to all it has in store.  Here is a quick peek at some of it.

1. I became a Fitfluential Ambassador (not sure what all this will mean for me, but excited about it all the same)!!

2. I joined Team Tough Chik (I think I am the only Team Tough Chik and Fitfluential Ambassador in Montana). They extended the deadline to sign up until the 7th of January, so if you are interested check it out!

3. I became a part of Team Beef Montana and get to be on their Hood to Coast Team. (so excited)!! I am excited not only to be getting to promote beef, but to combine it with something else I love so much (running)!

4. My race schedule, other than Hood to Coast will probably be much the same as last year, which means 2 half marathons, two 10ks, two 5 mile races, and a slew of 5k races.   I am toying with the thought of a marathon but if I did one would like it to be late spring, early summer which doesn't seem to give me a lot of choices around here.  I have no budget for travel, so I will just have to see what happens.  The only close marathon is in late September.

This time of year when it can be so cold out, I sometimes have a hard time getting my butt out the door for a run.  So here is the motivation for Monday. 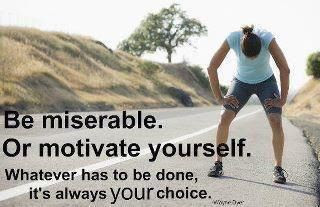 I can sit inside wishing I were running or get out there and get it done.  Yesterday I thought my hands were going to freeze off, but it felt so good to be out, moving, putting one foot in front of the other and putting those miles behind me. I did the elliptical on Saturday and was glad I did something but it just doesn't give me the same satisfaction as running does.

I am working on some goals for 2012.  I know I should probably have them done already but life has seemed so busy and I haven't felt like I have had time to work on them.

Elle won the Drymax socks giveaway.  Eat, Run, Sail was one of the first blogs I followed and Elle has been such a great supporter of my blog so I was excited for her when Rafflecopter picked her as the winner.  Hope you love the socks as much as I do Elle!

I announced a winner of the Beef recipes and water bottle a couple days ago, but it has not been claimed so I am announcing another winner.  Actually two.  I forgot when I posted the winner the first time that I meant for there to be two winners.  The winners are as picked from Random.org

Send me your mailing address and I will hopefully get your prizes mailed out this week!
Posted by Christy @ My Dirt Road Anthem: A Runner's Blog at 5:06 AM