Run to the Pub Half Marathon Recap

We left our house at 5 am which was no big deal because I had been wide awake for 2 hours already by then.  I hate when I can't sleep!  We picked up my sister and her husband and headed out.  Bozeman is about a 2.5 hour drive from my house, so not too bad a drive.

We got up there in plenty of time to pickup our race packets and were left with an hour of waiting to catch the buses out to the start.  I got my husband lined up with a good place along the route to cheer us on from and then the boys took off to do their own thing for awhile.

It was a little chilly at the start and I had a hard time deciding if I should take my long sleeve shirt off or not, I was cold so I left it on.  I hate being cold..of course I hate being hot too so I should have just taken it off.

Finally it was go time!

The first three miles were uphill, not in a hard horrid way, just a slight sloping way.  I kept these three miles pretty steady and was feeling pretty good.  Of course about mile 2  I started getting hot and was regretting wearing my long sleeve pullover, so I took it off and tied it around my waist, which is also annoying but at least I felt cooler.

After mile 3, the road started sloping down slightly and felt pretty good.  My pace picked up a bit and I felt really good.

I saw my husband and brother in law around mile 6.5 ish? and gave my husband my coat.  It was a great mental boost to see him.  He doesn't normally come to my races.

Somewhere at the start of the 8th mile Kiley caught up to me and we ran together for awhile.  I was starting to feel tired at this point.  I don't know if the higher altitude was getting to me a little but it felt harder to breathe.  Probably just not in the kind of shape to maintain a sub 7:30 pace... anyhoo, we ran togehter for about a mile and a half ish and then she was off and making it look easy!


At this point there were also a lot of 10k runners on the road and I had to do a lot of dodging and weaving.  I had it in my head that after the end of mile 8 and the start of mile 9 there were no more hills.  WRONG... so wrong. The last hill didn't end until the end of mile 10.

That last hill kicked my butt, my quads felt spent after that.
.

Thankfully after that it was all downhill, but my legs were pooped!  I had really hoped for a sub 1:40 finish and was on track for it until the last couple miles.  I did't quite pull it off.

Here are my splits. 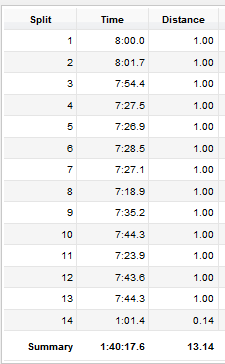 I also find it motivating... clearly I need to be doing more speed work! I felt like I pretty much left it all out there yesterday.  My legs are feeling a little sore today.  I have some yoga plans and maybe a walk to loosen up a little.

I found the race very well organized.  Packet pickup was quick and easy. The buses were lined up ready to go on time. There seemed like there were quite a few water stops along the way.  I carry my own though so I didn't pay too much attention to it.

We got a long sleeve tech shirt and a pint glass.

Although it seemed like there weren't a lot of portapotties I never had to wait in line more than 5 minutes to use one.

The course is beautiful with great views of the Gallatin valley and the mountains in the distance.

There was a free beer waiting at the end and the finisher medals were bottle openers. Post race food was water, oranges and bananas. Pretty simple, but enough for me.  Oranges post race are my favorite.  They also had some food vendors there and after I had my free Guiness I ate a HUGE burrito that left me stuffed for the rest of the day.

The worst part was running into the huge mass of 10k racers and having to weave through them at the end of the race when I was getting tired. or maybe the worst part was that I did not win one of the four trips to Dublin that were given away.

My little sister had been having some back problems and just wanted to come in under 2 hours.  She ran it in 1:52 ish so she did great!

Blogger fail, I had my camera charged up, but then left the memory card at home!  My sister and her husband did get some pictures so I will have them send me some and hopefully have some to share!

So half number 5 is in the books!