The PLAN was ton Saturday to work cows in the morning, come home shower, drive 2.5 hours to Bozeman, pick up my race packet, go to college football game and then spend the night in a hotel before the half marathon.

What really happened was I stayed home with a sick kid on Saturday while my husband went and worked cows, we watched college football game on TV, and I got up at 3 am to drive to Bozeman for the half marathon. I had a friend pick up my race packet for me on Saturday when she got hers. 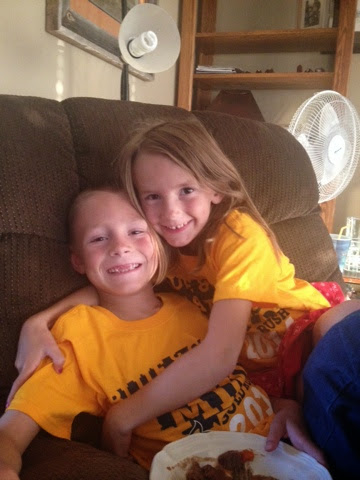 The drive up was pretty uneventful and I picked a parking spot coincidentally right behind a guy that I work with who was also running the half marathon.  I walked down to main street and met up with my friend Billie Jo and we hopped on the bus.

It was a little chilly at the start but I knew once we got running it would feel great.  If you are looking for a scenic Montana marathon or half marathon this one is beautiful.  The views along the run were amazing. Sorry I didn't get any pictures.

Pre-Race picture by the porta potties with a Team Beef Wyoming member we ran into. 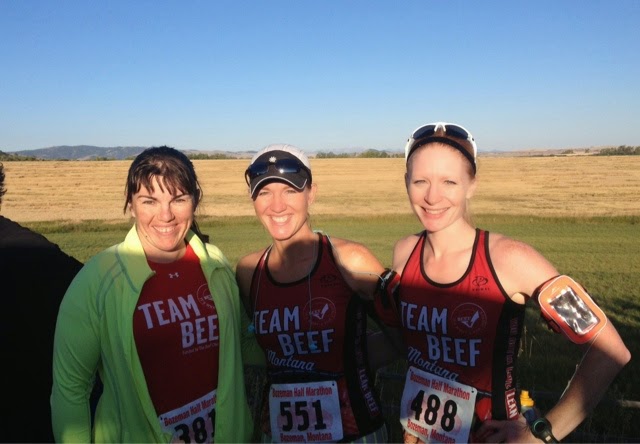 Anyhoo on to the race.  About four minutes before the gun went off I realized I had not turned on my Garmin yet (FAIL!) It still had not found a satellite when I crossed the starting line and didn't until I was roughly half a mile in.  When I hit the one mile marker my Garmin said .56 miles, so I was about .44 behind on the Garmin.  I hit the lap button at the mile marker so it would tell me my times on the mile.

The first three miles flew by and felt fast, my legs felt fresh and full of energy, my breathing was under control and I didn't feel like I was breathing hard at all (awesome).

About 4 miles in my hip started to feel like it had something going on with it.  Nothing bad, but not great either, just a niggle.  It was still there at 5 miles and starting to bother me more so I worked on my form a bit, shortening my stride and increasing my steps per minute.  That seemed to do the trick and after awhile the niggle went away.

The course is mostly downhill, but there were a few hills and my legs were so used to going down that the uphills were killer.

10 or so miles in I saw the guy that I work with up ahead and started to reel him in.  When I ran past him I took out my earbud and said to him "The word is "chicked".    Of course after that I was afraid he would pass me again and I would have to eat my words so that was pretty good motivation so keep moving as by now my legs were getting pretty tired.

I was also breathing a lot harder by now, but knowing there was only 3 miles left is pretty motivational.  I went back and forth with several different guys, two of which came up to me after the race and said thanks to me they had PRd and thanked me for the motivation to keep pushing.  I don't really feel like I can take credit for their PRs but they did help push me too since every time they passed me I worked to pass them back!

When I finally turned onto Main Street where the finish line was I was a little sad about how far away it looked, but I managed a 6:51 pace for the last part of the race.  I crossed the finish line and was toast!  My legs were tired.

I  got in line for the free massages and chiropractor adjustments.  He did something to my calf that had me wanting to cry, but it did feel better afterwards.

I met another Team Beef Montana gal and we had a great time visiting at the finish line.  She won her age group.  Go Team Beef! 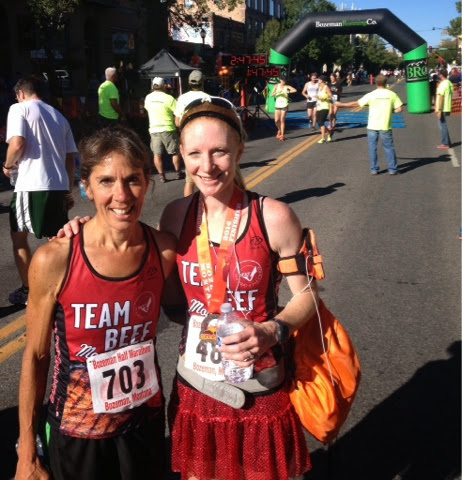 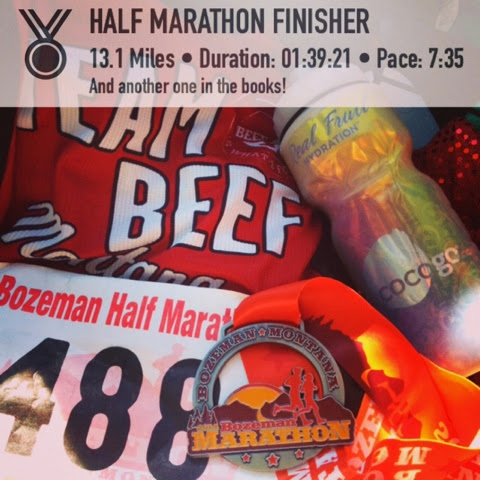 Ups
Great course, not very many hills and fast!
Lots of aid stations along the way.
Scenic
There were more spectators along the way than I expected for as rural as most of the course is, so that was fun.
My second fastest half time.
Lots of great Team Beef peoples.  There was one other girl, but she left before we could get a group photo.

Downs..
Not getting very much sleep the night before
Feeling jittery from all the coffee I drank on the way up.  oops
Little sore in the calves and quads today.
Sad my family couldn't be there so cheer me on, I was really excited about it.

I would do this race again and hope to next year. I think the downhillness of the course (what Shakespeare made up words all the time) helped cut almost 2 minutes off my last half time and with more dedication to speed work this would be a great course to PR on. I was only about 2 minutes off my PR time of 1:37:06.

Final thought.. I love half marathons.  I was hurting so much towards the end I thought I could wait a bit before I do another, but today I am already thinking ahead to when I can do another!