End of the Year Eww

I kept telling myself that I would be starting speed work up again in January in the new year but then I saw a magazine cover that had "New Year New You" on it and I thought that was lame.  Why do people have to wait for the new year to have a new them.  What if you don't want a new you?  What if you are happy the way you are.  So on that note I decided to start today.
The windiest day of the year.
Okay it wasn't really the windiest but it was really freaking windy!  I did a two mile warmup with the first mile going INTO the wind and the second mile was cross ways with the wind so it wasn't as bad.
I did 8 x 400 meter intervals.  The first three felt really rough.  It may or may not have had anything to do with the hills.  I like to think it did.  The 4th and 5th were feeling better and the 6th and 7th felt great like my legs were remembering what they needed to do. Okay and it was more downhill at this point too.  Then I had to listen to my guts and head for the cover of the bushes in the creek (luckily I carry toilet paper with me).
I then saw these two garbage bags in the ditch.  I HATE people that litter.  Really you couldn't wait. 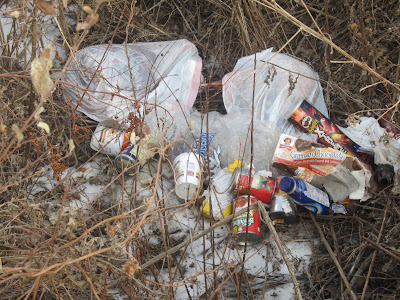 Then I noticed that all the cans were unopened and the catsup and mayo were only half gone.  The Pringles cans still had chips in them and the noodles weren't open either. The other bag looked like it was full of meat.  I didn't open it though.  Eww.   Littering AND wasteful.  I hope they got coal for Christmas.

Then I noticed Cola doing this and acting weird so I looked over where he was. 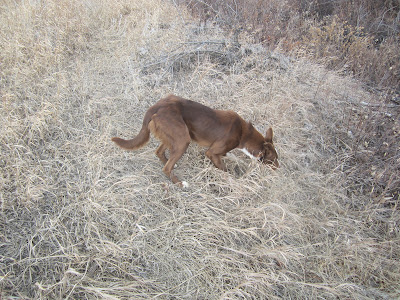 Don't look if you are easily offended or grossed out.  Really 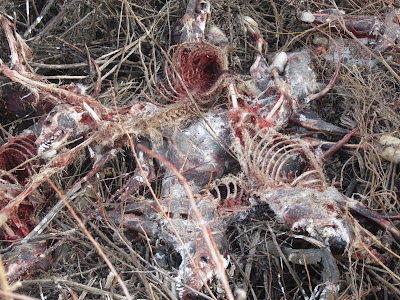 Not sure exactly but guessing they were coyotes??  They were pretty small Totally skinned, gutted, and dumped by the side of the road.  There were at least ten of them. Too bad they weren't wolves.

A little freaky.  So I got out of there and finished my last interval.  It was my fastest one.

I did a bit of an easy run for another two miles one mile at half marathon pace and the last mile back home was into the wind.  I was wiped out by the time I was done but it felt GREAT to get some speed work in.

I saw a bunch of deer also I tried to get a better picture but by the time I whipped out  my camera they were pretty far away. 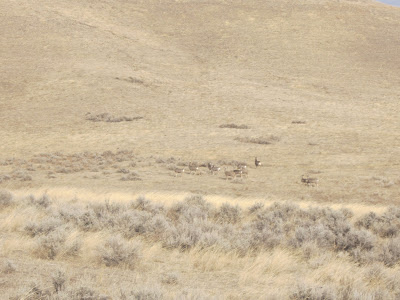 What are thoughts on the New Year New You attitude?  Do you find it as annoying as I do?

I know it is a great time to launch a new attitude and goals, but if why do you think you need a new year to do it?
Posted by Christy @ My Dirt Road Anthem: A Runner's Blog at 3:46 PM