I hope everyone had a wonderful Thanksgiving!  My internet has been down much of the week so I haven't been on here, but a break is nice too.

I ran a 5k on Thanksgiving, my first 5k of the year! In fact I think it has been well over a year and a half since I ran a 5k.  Seems like a long time to go without running a 5k doesn't it?

I have to admit to feeling nervous and not real sure just how to pace it.  I haven't run anything shorter than a half marathon since June, unless of course you count the Ragnar Relay, which I don't.

The weather for the 5k was pretty good, slightly on the chilly side so I wore tights and a long sleeve shirt, and gloves because I hate cold hands.  I had been a little worried with all the snow we got Wednesday the streets would be snowy and full of ice.  The start line and all around it looked good.

The gun went of and some kid who looked about 10 shoved me rudely aside and sprinted out.  I have to admit here, I really wanted to shove him back.  There was no "excuse me", just a two handed shove that pushed me into the person next to me. What the heck!?

Anyway I think I did pretty good not starting out too fast since I saw a number of people sprint out nicely (no shoving) past me in the first 100 yards or so that I later passed a lot of later in the first mile.  I also passed rude boy, and while I really wanted to give him a double handed shove as I ran past the now laboring kid, I just leaned over and said "you shouldn't be rude and push people when you run past them, it slows you down later" and off I went.

About half a mile into the first mile the streets quit being so nice and turned to a sheet of ice.  We had left the main roads and were now in a residential area.  It was rough.  I tried to mostly run in the snow along the side of the road that wasn't packed down into ice and that seemed to help a lot, but it was still hard to avoid the ice.

Mile 1 6:59
Not too surprised to be under 7, but worried about maintaining it

Mile 2 7:14
Slowed dramatically by the ice, it sure felt good to hit ice free intersections and speed up, but then it was back into the ice!

Mile 3  6:59 WOOT!  I really didn't expect the last mile to be under 7, about half of the mile was ice and the other half good streets, so it felt good to speed up and run with fear of falling again.

They gave out pint glasses at the finish line to fill with either beer or root beer.  There was lots of oranges, bananas, and frosted cinnamon rolls to eat, but I didn't feel like sticking around.  I visited with a few people and then headed home to get ready for Thanksgiving.

I wasn't, HA! I guess that means I should have busted my butt a little more.

Speaking of my birthday.. I got new boots for my bday.  New cowgirl boots from my Dad and new muck boots from myself :).  My old winter boots were nearly 20 years old.. good boots, but time for new ones. 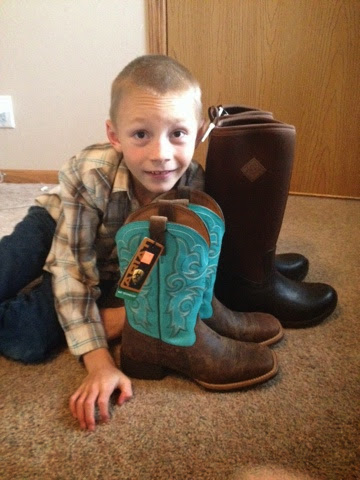 The last time I bought new boots for riding was almost 10 years ago right after I started dating my husband!  Yay to both.