A day in the life

Monday morning as the kids and I waited impatiently to see the bus lights crest the hill about a mile from our house my daughter asked why didn't I ever drive them to school?  I made the mental list 40some mile round trip, an hour and more out of my day off, peace and quiet, kids fighting on the way to school, gas isn't cheap etc etc.  Then we noticed the bus was late.

SO I called the bus barn at the school. "Yes" the lady on the other end of the phone reassured me "the bus is stuck by so and sos house."  She sounded rather stressed and as I know they are extremely short on drivers and they were trying to either send another bus or someone to plow her out, I reassured her the boys out here would get it done.

My brother showed up with his tractor and by the time he got there another neighbor had noticed the bus drivers plight and was there with his tractor as well. My sister in law ferried her son over the snow drifts and he hopped in with my kids and I drove the kids to school.
I got the kids to school just in time and then headed home for a morning of laundry, cleaning and catching up on Downton Abbey, and an afternoon of helping get the heifers Bangs (brucellosis) vaccinated. My niece who is the last cousin not in school entertained herself by playing in the snow and climbing the bales in the corral. She didn't whine once. What a great ranch kid! 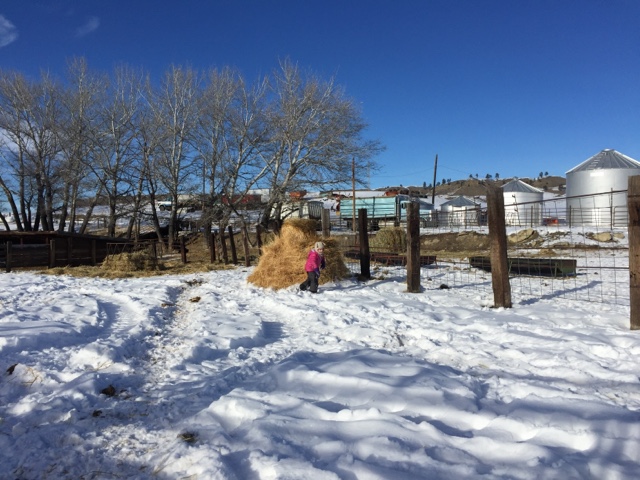 Then while my Dad, brother and sister in law made a pretty strong effort to move them to another pasture I went for a run.  I would have helped with the effort but there weren't enough 4 wheelers for everyone.   I helped get them out of the corral and headed in the right direction. I didn't see the end result but I am pretty sure they never left the pasture they started out in.  These girls aren't even a year old and can be a bit dodgy to move if they don't want to go where you want them to and having not much life experience they don't know that there are greener pastures... well this time of year just whiter ones. 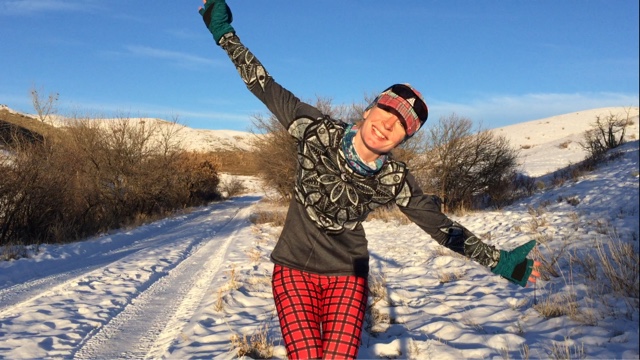 It was three miles home and once I got home my little dog convinced me to run another two miles before the kids got off the bus, So I did. Supper was in the crock pot after all.

Posted by Christy @ My Dirt Road Anthem: A Runner's Blog at 4:57 AM