Half Marathon Pictures from the Big Sky State Games

Here is the start, not really sure that I see me, but maybe am standing behind the guy in the white shirt and blue shorts second row in on the left.  Do you see some red hair right over his head?  Might be me.  It was a pretty narrow start, but since there were only 63 of us it wasn't too bad and it thinned out pretty quick. 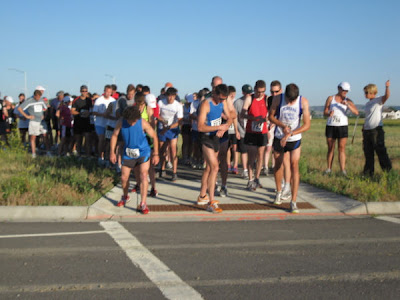 Coming in at the end.  Hot. Tired. Glad to be done.  And a new PR! and I am quite a heel striker, more so than I thought.  I have never really paid attention to that before, maybe I will start working on my form. I wasn't sure if I would like racing in my hydration belt, but I did.  For the most part I didn't even notice it was there.  It was so nice to have the Nuun to wash down my chomps or have a blast of whenever I felt like it.  Especially with as hot as it was outside! 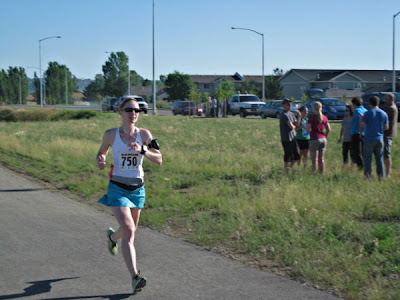 Do you like my blue sparkle headband from Active Bands?  I do!  I was chatting it up with Tiki here, she ran the 10k and was back after taking time off for a broken toe.  We look like we could be getting ready for a Nike ad or something.  Speaking of Nike!  I won Nike sunglasses over at Average Girl Doing Average Things and  a RazzyRoo headband from Pink Hat Runner  so what a great way to celebrate my PR on the half :) 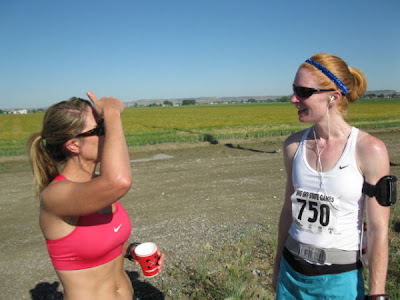 I think I will have some more pictures coming, but I wanted to get these up.

Does your state have a State Games?

Have you ever participated?

I have shot skeet in them before also.  They have so many events you can compete in.  The girl who won the half marathon also got second in the 5k the night before, 2nd in the triathlon the next day and won the biathlon.  AMAZING!  I also forget to mention in my race recap that they had Jackie Joyner Kersey at the opening ceremonies.  I really wanted to go.  She was one of my heroes back in the day, but I had a birthday party for my nephew to go to, so I skipped it.
Posted by Christy @ My Dirt Road Anthem: A Runner's Blog at 5:08 AM