I squeaked in a PR and had fun! Big Sky State Games Half Marathon Race Recap

Yoohoo! To think a week ago I was sitting in the car crying with my left knee swollen, pretty sure I was not going to be running or even getting a PR today on the Big Sky State Games half marathon!
I got up before the alarm went off this morning and fixed a bowl of oatmeal, peanut butter and chia seeds, drank a cup of coffee and 20 oz of water.  I read a few blogs then got dressed and headed out.

I picked up my race bib right when they set up, then headed to the porta potties.  I spent a few minutes chatting with some girls then headed out on a warm up run and did a few stretches.  Waffled between wearing my heavier, cushier more suppotive Asics Kayanos and my lighter, less cushy less supportive Saucony Fasttwitch shoes.  Decided to go with light and fast. It was a decision I didn't regret.  I just hadn't worn them on anything longer than a 10k yet.

With about ten minutes to go before the start I headed over to the start with Sarah Graves, who I knew was going to beat me without question.  that girl is so fast.  So fast.  The start was very unorganized and narrow.  The run was starting on a bike path.  The starter guy had us line up by how fast we were going to run and then Pow we were off!

Mile 1  7:24  I was working really hard to reign myself in.  I like to start fast!  It was a little hard to see all those people pass me, I just kept reminding myself to stick to the plan of  8ish minute miles to start with then kick it in for the end

Mile 2 7:43 Still working really hard to slow it down, but found this a good pace and decided to go with it.  The route was fairly flat slightly uphill still.

Mile 3 7:48 Feeling really good still.  Grabbed a glass of water at the first water stop.  Still being passed by a few guys. But no more girls. Course still fairly flat

Mile 5 7:35 Slight downhill and decide to pick off someone.  I pass a girl in a cute orange shirt and never see her again.  I remember her, she went flying past me in the 1st mile when I was working hard to keep my pace down.  Starting to feel like this is going to be a good race.  I break open the GU chomps and have three.

Mile 6  7:59  Another big hill, but it felt good.  Getting excited about being nearly halfway done and feeling so good.  Picked off another girl and a couple of guys. Finally had some good shade.  We were running in the country club area.  The shade felt divine.  Felt good that everyone I passed was breathing laboriously and I had it under control!

Mile 7  7:22 Mostly all downhill, passed a lot of people.  Feeling good and I mean good!  Starting to think I could possibly PR

Mile 8 7:51 Back up the hill we just came down, ugh, but I was feeling strong and felt consistent going up.  Passed two guys with no shirts on, and one young guy running like an old man.

Mile 9 7:37  More down hill and some flat.  Feeling pretty good.  Wondering why I always think yay I only have three miles left when I see the 9 mile sign, then realize I really have 4 left.  Feeling good.  I can see two more girls up ahead.  Put my sights on the first one and keep running.  I notice my breathing is a little less under control, legs are starting to feel tired.  Eat some more chomps.

Mile 10 7:21  Feeling good and cruising down the hill, getting closer to the girl with the red shorts but still have a pretty good gap.  Wonder if I will catch her.  Pass another guy instead.

Mile 11 7:32  Feeling awesome.  I could do this all day.  Skipped the last water stop.  I still had water in my fuel belt chugged that instead.  Red shorts girl walked through the stop and I mentally checked her off the list and cruised on.  At this point I know that I can PR if I can maintain about a 7:40ish pace.  I want it so bad.

Mile 12 7:44  Hit the wall.  I felt like I was cruising, but my garmin told me otherwise.  The sun was really beating down, my legs were getting tired and I was going from hot to hotter.  Knew I probably was not going to pick off the girl 200 or so yards in front of me so I just tried to maintain and pull inspiration from anywhere I can think off

Mile 13 7:50 As hard as I tried could not lose the wall.  Legs were spent from the hills and I was so hot!  I wanted to jump in the ditch we were running by.  The last two miles were flat and straight.  Felt like I could see the finish line coming at me forever.  I really wanted the PR so bad, but was starting to think I was not going to get it.4

I ended up 3rd female overall and 3rd in my age group, 17/63 for men and women. That's right only 63 people total did the half marathon!  So a small one, but I loved the course hills and all except the last two miles when I hit the wall and my body was cooked from the hot sun shining down on me.

I stuck around for awards and had fun visiting with everyone then went and picked up the kids from my husband  where he was tending a friends farm and ranch supply store for the day.  The kids had a birthday party in town so there was no time for me to drive clear home and back.  Also seemed like a waste of gas, so I took them to Subway for lunch and Candytown for dessert.  My stomach was not in the mood for candy so it was pretty easy to get out of there for cheap. 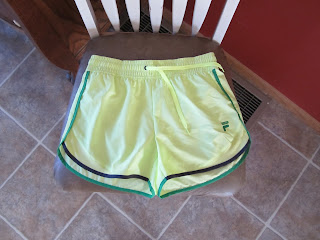 Then we headed over to Kohls to find a birthday present for the birthday girl and get some clean clothes for my daughter and a t-shirt for my son.  I also awarded my self these awesome shorts. A PR merits new clothes or some kind of reward don't you think?
They are much brighter in real life.  I almost had a matching tank.  A pretty snappy outfit. But I talked myself out of it.  It didn't look that great right up next to my face.  The neon yellow was arguing loudly with my hair.  Besides I have lots of other shirts that will do just fine.

I did find these shorts and capris on the clearance rack for 80% off!  Yay, I was in need of new  summer clothes. 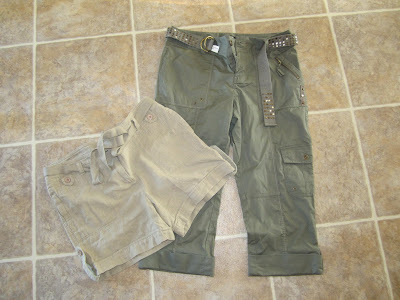 And a tank for summer, pretty and sparkly!! 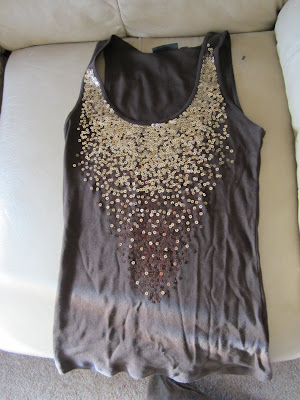 Now that I have survived getting up at 4:30, running a half marathon, shopping with the kids, a 3 year old birthday party, Walmart and a blogpost that  seems to be going on forever, I am going to go take a shower and put my feet up.

Looking forward to reading all the race reports from this weekend.  God luck to everyone who has races still to do.  Thanks for the playlist ideas I got some great songs added to the play list.

Tell me what you do when you hit the wall!
Posted by Christy @ My Dirt Road Anthem: A Runner's Blog at 7:27 PM