Happy Blogiversary to me and last week in review

A pretty good week other than...not a lot of running and my foot acting up. I did get a lot of work done in my flower beds and we got a timely rain over the weekend which will really make our hay crop grow.  I love spring.  I have an appointment on Tuesday with a foot and ankle specialist so hopefully something there will shed some light on the situation.

It is so green and beautiful out, I really want to be out in the hills running! Not sure why the photo looks so technicolor. 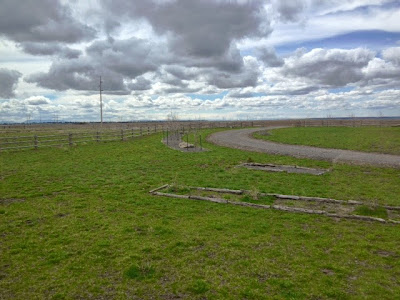 I want to run so badly and with my foot not hurting it is hard to not run, however after I month of this resting only for it to hurt 2 miles into a run I admit to being a little hesitant to run.  I had toyed with running today before I go to my appointment tomorrow, but have decided not to.  I will instead see what she has to say and give my foot another couple days of rest from running.

and that is my week!   Yesterday was Peaks to Prairie and I as so sad to be missing it, however it did snow where the run part was at least 3 inches of slushy snow covered the roads and they had to delay the start a bit, so that helped make me feel better about missing it, if I have to miss it!

Also I just realized yesterday was the three year anniversary of my blog.  You would think I would have some big giveaway or something.. sorry no.  Not that organized apparently.  I do have a giveaway in the near future does that count?