I have been pretty good lately about working out.  Running is supposed to be as tolerated.  I ran 6 miles last week and the first two went pretty good.  Two days later I ran four miles and the first 2.5-3ish miles went pretty good and then I started getting tight in my groin all the down my inner leg to the knee on my right side.   I was so sore the next day.  Boo  So I didn't run all weekend, but I did the elliptical and that seems to not bug me.

Yesterday my son stayed home from school with a tummy ache so it was back to another day of the elliptical which I am so over so I cut my workout short by ten minutes to play cribbage with my son.  He felt better by the afternoon so we rearranged the living room and had some wrestling matches.  He is getting so tough! After he spent most of the morning on the couch he felt better and he had such a great afternoon of Mommy and Cade time.

I am hoping to try for a couple of miles after work today as the leg is feeling good, hopefully the wind will be better today, it was awful yesterday so not running wasn't all that much of a bummer.  I might have blown away.

Last night I heard my daughter rustling around in the pantry so I asked her what she was doing.  I got a "I just need a few bags"  She loves bags and boxes, so while my first instinct was to tell her to put the bags back (not because I am a mean mom, but because I could only imagine the craziness she was planning and the mess that could result. been there, done that,) I decided to let her do what she was doing.

Here was the result. 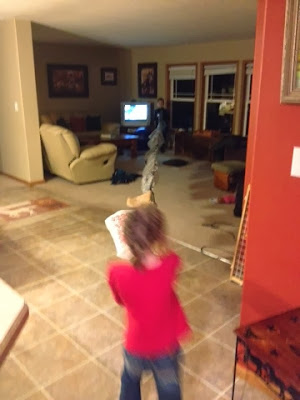 A very long rope made of plastic grocery bags that her and her brother ran around the house with.  I love their imaginations.  They had the best time with it for about 20 minutes and then Avery tucked it away in her room "for later". 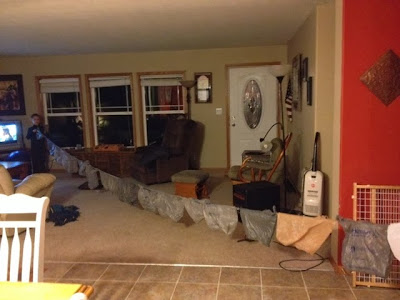 I am really loving my new haircut, even my just climbed out of bed in the morning hair looks pretty good. 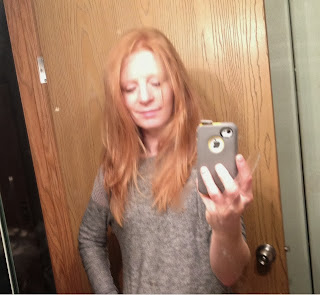 Was is windy where you are yesterday? We had gusts of up to 60some mph.  Ick!
Posted by Christy @ My Dirt Road Anthem: A Runner's Blog at 4:12 AM