So I went to a doctor and apparently was like a celebrity.

Thursday I went to the doctor to see about my right leg that keeps bugging me.

Symptoms, some of them anyway, I could bore you

I had to fill out a form before I saw the doctor and it had the "faces" pain scale on it.  He was amused I rated mental pain a 10 with no running. 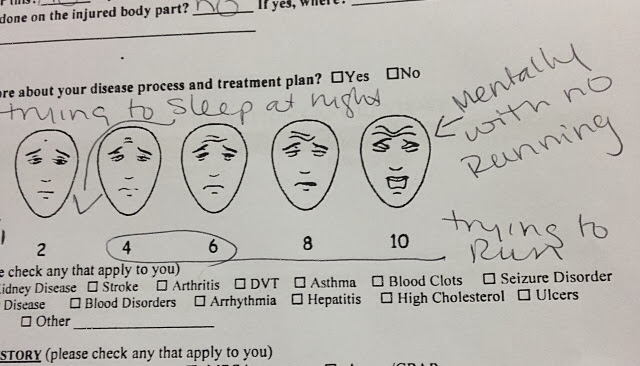 After explaining all my symptoms, he decided it might be a back problem.  Oh great.  I have had back problems before with sciatica just never down the front of my leg.  I got an x-ray taken of my back and in his words "it's disgustingly perfect", so he wanted to do an MRI, but I know those are rather pricey and I wanted to be more conservative first and figure out how much the MRI will cost before I commit.    He put me on a Medrol pack for a week and then I will follow up with him in three weeks to see how it's doing.

He thinks my symptoms are pretty consistent with L3, L4 nerve problems on the right side.  I really thought he would say, yup, muscle strain, somethingitis, and send me to physical therapy.

On a fun note he is an official medical provider for the US Ski Team. 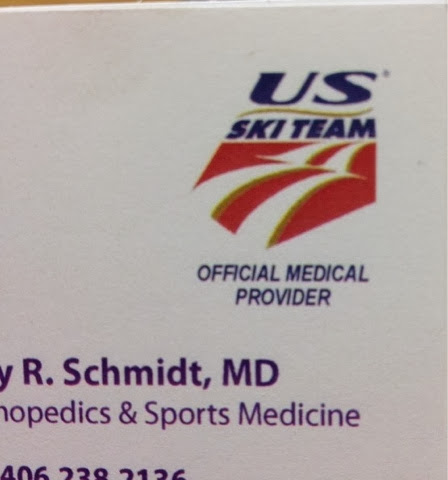 Happily he did tell me that I could run as tolerated.  Although with the wintery conditions, bad roads, and sub zero temps right now I think I will put off running for another little bit since I don't have a treadmill and I have no races on the calendar.

Takeaways
Plan for now
I mentioned before that I work with all the surgeons in this office, and the physician assistants, so it felt weird going in being in on the other side.  I learned yesterday I was the talk of the office.  The surgeons and PAs of course tell stories about things that happen in the operating room and apparently they have heard a lot about me.  Dr. Smith, who I work with a lot, (by a lot I mean at least once a week sometimes twice a week for the last 13 years) has told a lot of stories about me over the years, told me yesterday that some of the office staff over there were feeling like they should have their picture taken with me.   so funny!