Heart and Soul 10k Recap: Rain and No Garmin

I got up Saturday morning to a 20% chance of rain.  When I looked out the window it was sprinkling.  It wasn't long before it was raining pretty hard.  My kids thought I was "crazy, brave and tough" for doing a run in the rain.

By the time I drove into town the rain had quit and it was a beautiful morning for a race.  Temps were in the low 50s and it overcast, slight breeze.  The 5k started at 8 am and while that was going on I had my gait analyzed. I will discuss that in another post or this will be really long!

I tried to turn on my Garmin 10 minutes before the race started. I figured that should be enough time for it to find satellites.. Wrong. By the time the gun went off it was still searching.  UGH.  I started the timer anyway hoping it would latch on to a satellite soon.  Spoiler: IT NEVER DID.  It was really cloudy and raining the first three miles of the race, but it usually still manages to find a satellite within 5 minutes even when it is cloudy.

Moving on from that.  I have not run a race by feel since I ran a 5k like that years ago and PRd.  The rain had just picked back up when the gun went off and it felt wonderful.  The first two miles of the race I felt like I had perm grin.  I was using an 11 year old girl to pace myself. It's true.

She had finished just ahead of me at the last race (a five mile race) so I figured if I kept her in my sights I would be pretty close to where I wanted to be.   Miles 3,4, and 5 felt really long.  Mile 6 and the last .2 were mostly downhill and felt like it just flew by.

After the first two miles with no Garmin, I decided that even if it did find a satellite I wanted to continue to pace off the little girl and run by feel.  I was really hoping for a roughly 7:20ish pace.

Right at the end of mile 5/beginning of mile 6 I can't remember, near the end,
we have to run up four levels of a parking garage.  Talk about rough, but at that point I knew once I got out of the garage it was downhill or level.

How I felt overall .. great!  Tired at the end so I know I pushed hard.

Three out of the four Team Beef Montana members present 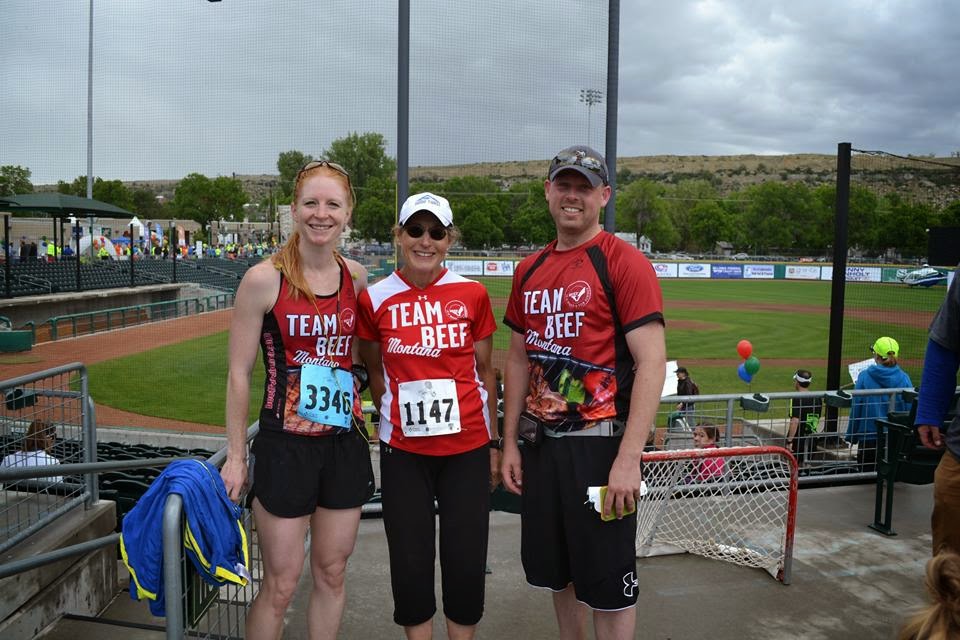 Would I choose to do it again without my Garmin?  That's a hard one.  On one hand I really enjoyed not stressing about pace and distance too much and just enjoying the run.  I even high fived some of the volunteers during miles 2 and 3 until I started getting tired and had to focus on running more.  On the other hand, I really like knowing my pace and keeping on track with goals, pace, etc.

I don't feel like I was in it very much mentally.  I think having no Garmin and rain threw me for a loop, which is funny because usually I am really on with my mental game. I mantra my whole way through races sometimes after the first mile. I really loved running in the rain though that can happen every time!